The Davis Cup World Group Play-off between Australia and Switzerland is tied at 1-1 after the first day's play. 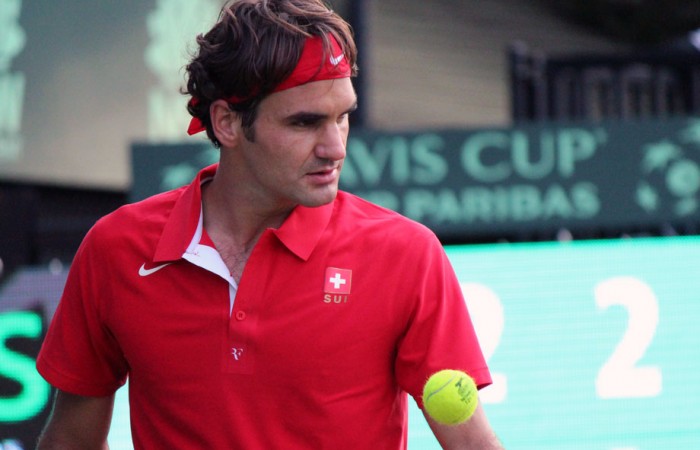 Australia gave themselves a fighting chance of returning to the Davis Cup World Group after splitting their singles matches with Switzerland on Friday but will wonder what could have been after Lleyton Hewitt eyed off an improbable victory over Roger Federer.

Rising star Bernard Tomic started the tie in style with a four-set win over Stanislas Wawrinka before the unlikely started to look possible with Hewitt a set and a break up over the 16-time Grand Slam champion.

The pair turned back the clock to some of their classic duels, slugging it out in a gripping first set.

Hewitt snared the opener with two blistering crosscourt forehands and looked on track for consecutive wins over the Swiss maestro when he went up a break in the second set only for Federer to find form.

A scything backhand earned the world No.3 the break back and from there he got on an irresistible roll, taking the set 7-5 in the tiebreak and steamrolling his way through the third set with dual breaks.

The Australian had his share of break point opportunities in the fourth but Federer made good on his in the fifth game to take a stranglehold of the match.

Hewitt has little to be unhappy about though, his spirited play rendering his world ranking of No.199 meaningless and the former world No.1 will fancy his chances against the disappointing Wawrinka on Sunday.

The Swiss No.2 had started brightly against Tomic, mixing up his play and even managing a number of successful forays to the net.

But the lanky Tomic loosened up after the first set, playing the kind of grasscourt tennis that took him to the Wimbledon quarter-finals this year.

Much will now hinge on Saturday’s doubles match with Hewitt and Chris Guccione slated to to play Federer and Wawrinka.

The pair – who have won their two Davis Cup doubles matches playing together, took out gold for Switzerland when paired for the 2008 Olympics.

Hewitt and Guccione won their only Davis Cup doubles match together against China in July.

The winner of the tie progresses to the World Group in 2012 while the loser will play zonal qualifiers in a bid to get back to the top tier competition in 2013.