Sam Stosur, with the US Open trophy in hand, is ready to handle the pressure at January's Australian Open in Melbourne. 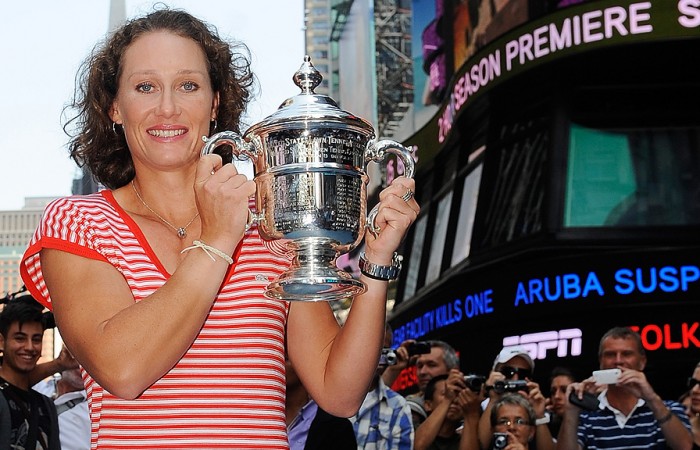 Samantha Stosur, with the US Open trophy in hand, is ready to handle the pressure at January’s Australian Open in Melbourne.

Her coach David Taylor believes Australia’s latest grand slam champion will be prepared to handle the wave of expectation that will hit her during the Australian summer.

“I think she handled herself well in Australia [this year] but I think she learnt more than anything else,” he told AAP.

“What a learning experience being on billboards and being on TVs. She is ready for that now and much better prepared.

“I really look forward to her doing well in Australia, that is a massive dream for her.”

Despite her growing status in the sport, Stosur has enjoyed only a fraction of the attention at the French Open, Wimbledon and US Opens compared to her home slam.

“We’ll see how I handle it when the time comes,” Stosur said following her 6-2 6-3 US Open final win over Serena Williams.

“But if I can play like I did today, then hopefully it’s all going to be okay.”

Since making her breakthrough performance by reaching the 2009 French Open semifinals, Stosur has been rolled by Williams and Wimbledon champion Petra Kvitova in the fourth and third rounds respectively at the Australian Open.

Taylor maintained his belief that Stosur’s best surface was a slow hardcourt despite her best achievements before Flushing Meadows having come on clay at the French Open.

“Sam is one of the people that can win the Australian Open but there are five of them and let’s not forget that,” he said.

“She has put in a lot of work on the mental side [with AIS sports psychologist Ruth Anderson] and been open to new ideas.

“I can’t say enough about her. She has been able to look at herself hard in the mirror.”

Taylor said Stosur had been relentless in her pursuit to improve her game.

“No stone unturned, an absolute pleasure to coach,” he said.

“She is always just doing whatever she can to be a better tennis player and I have the best job on the tour.”

Stosur, who lost a year of her career after being diagnosed with Lyme disease in 2007, said the success at Flushing Meadows had made all of her sacrifices worthwhile.

“When I was younger, my family gave up a lot,” she said.

“My parents and my brothers got dragged through the tennis clubs.

“But I’m lucky that I had a really supportive family.

“They saw that I had this dream and drive and determination to be a tennis player and none of us knew if that was ever going to pay off.

“Playing all those small tournaments and I’ve slept in train stations and stayed in dodgy hotels and done the hard yards through many places, and it is awful.