Stosur powers into US Open final

Update 11:30 am. Samantha Stosur has progressed to the US Open final with a 6-3 2-6 6-2 win over German Angelique Kerber at Flushing Meadows. 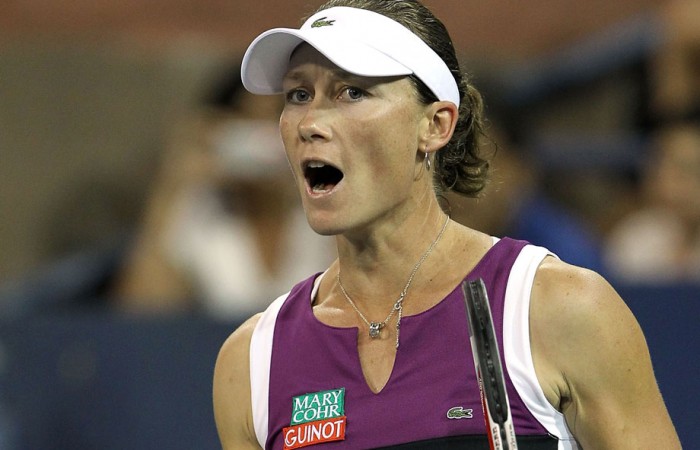 Update 11:30 am. Samantha Stosur has progressed to the US Open final with a 6-3 2-6 6-2 win over German Angelique Kerber at Flushing Meadows.

The Australian completed the victory in one hour and 46 minutes and will play the winner of Serena Williams and Caroline Wozniacki in her second Grand Slam final on Sunday (0630 Monday AEST).

Australia has not had a woman reach the US Open singles final since Wendy Turnbull in 1977.

The nation’s last woman to win a Grand Slam title was Evonne Goolagong Cawley at Wimbledon in 1980.

With the men’s semifinal between Rafael Nadal and Andy Murray being played at the same time on centre court, Stosur’s match on Grandstand pulled in a modest but vocal crowd.

The match was pushed onto the No.3 showcourt because of the scheduling problems due to rain this week and court problems on Louis Armstrong Stadium.

Kerber had never progressed beyond the third round of a Grand Slam before this run and her lack of experience showed early on as Stosur raced to a 3-0 lead.

Not that the Australian was completely comfortable out on court in her first outing against the tricky left-hander despite taking the first set in a touch over half an hour.

The unheralded German settled down in the second set and started dominating the match with Stosur’s game starting to unravel.

Kerber broke the Australian’s serve twice and pushed the match into a final set after 68 minutes of action.

With the match on the line, Stosur hit her straps and raced to a 5-0 lead in the final set.

With victory in sight for the Australian, Kerber rallied to take the next two games before Stosur closed it out.