Samantha Stosur outlasted Russian 25th seed Maria Kirilenko 6-2 6-7(15) 6-3 to progress to the US Open quarterfinals for the second straight year at Flushing Meadows. 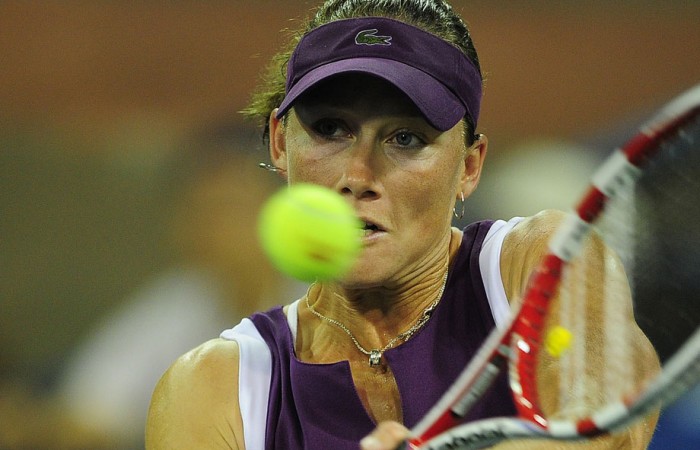 Samantha Stosur outlasted Russian 25th seed Maria Kirilenko 6-2 6-7(15) 6-3 to progress to the US Open quarterfinals for the second straight year at Flushing Meadows.

Stosur had five match points in an epic second set tiebreaker, the longest in women’s singles Grand Slam history, before finally closing out the match in two hours and 37 minutes.

The Australian won the contest on her eighth match point when Kirilenko dragged her backhand wide on the Grandstand court.

The longest tiebreak was just the latest record for Stosur, who won the longest women’s singles match in tournament history in the third round on Friday night and played in the latest finish in New York last year.

The winner of Stosur’s quarterfinal will meet either German world No.92 Angelique Kerber or Italian 26th seed Flavia Pennetta for a spot in the final.

The Queenslander is going to need all of her powers of recovery to be ready in time for the quarterfinal following her two marathon matches.

Stosur’s match was shifted off Arthur Ashe Stadium on Sunday afternoon with officials wary of a long contest disrupting the evening television schedule.

It might have been Stosur and Nadia Petrova’s third-round match on Friday night that lasted a record three hours and 17 minutes, that made them a tad cautious. And how wise their judgment proved to be.

Stosur and Kirilenko started their match on Grandstand nearly three hours later than scheduled and the Australian made a flying start.

She won the opening 10 points of the match with her heavy ground strokes overwhelming the slender Russian.

Stosur led 5-0 after 17 minutes, exactly the same imposing numbers that Serena Williams posted on her way to her third-round win over fourth seed Victoria Azarenka on Saturday.

The Australian hot streak cooled off but still won the opening set by the half hour mark, having landed 10 winners to her opponent’s one.

Kirilenko worked her way back into the contest with Stosur receiving a code violation for an audible obscenity after dropping her serve to trail 4-3 in the second set.

The Russian’s joy was short lived as Stosur broke back and the set had to be decided by a tiebreak.

Finishing off the job has never been one of the Australian’s strengths and Kirilenko mercilessly targeted her backhand throughout the tiebreak with plenty of success.

In a nail-biting affair, both players had countless chances to close out the set with Stosur unable to convert any of her five match points.

As the tension ramped up, Kirilenko correctly challenged three line calls before taking the set on her sixth opportunity as the Queenslander put a forehand into the net.

In the final set, Stosur broke Kirilenko’s serve in the fifth game and claimed a 4-2 lead.

After having problems serving out in her past two matches, the Australian had three match points on Kirilenko’s serve and sealed the third win on her third opportunity.