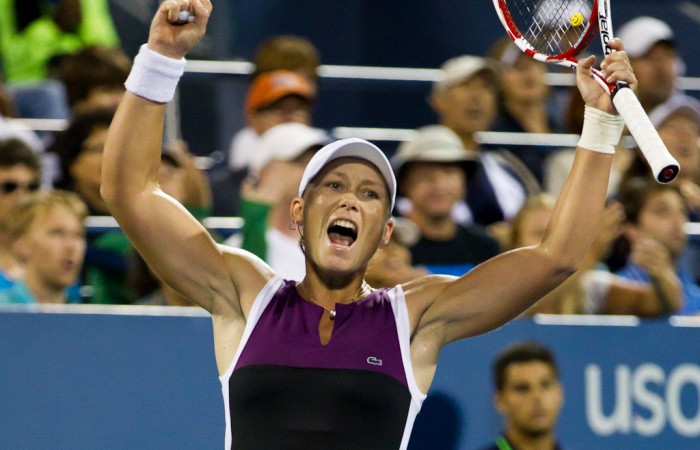 The big Russian pushed Stosur to the limit in a gripping contest before the Australian prevailed in three hours and 16 minutes in New York.

Stosur won the contest on her fifth match point and the result meant Stosur progressed beyond the third round at a grand slam for the first time this year.

She will next meet Russian 25th seed Maria Kirilenko for a spot in the quarter-finals.

Stosur’s side of the draw continued to open up earlier on Friday with her nemesis Maria Sharapova joining Marion Bartoli and Venus Williams in the departure lounge.

After dropping her opening service game, Stosur played some scorching tennis to jump to a 5-2 lead and served for the first set at 5-3.

However, she wobbled and was unable to take advantage of three set points as Petrova fought her way back for a tie-break.

Stosur again looked on top at 4-2 in the tie-break but Petrova captured three straight points to take back the momentum.

Petrova’s shot to take the 5-4 advantage was tinged with controversy, the ball hitting the back of the line and being called out as Stosur went to strike it.

The Russian challenged the call and was awarded the point instead of it being replayed.

Stosur, not normally known for showing her emotions on the court, vented her frustration as she struck a ball firmly back over the net.

After getting angry, Stosur got even by reeling off the next three points to take the set.

The Australian continued to pile the pressure on her opponent’s serve and captured a break in the fifth game.

Serving for the match at 5-4, Stosur had her problems again with two wild shanks and a double fault.

The Queenslander steadied to have two match points but Petrova responded by playing some stunning tennis to level the scores at 5-5.

In the resulting tie-break, Stosur saved two set points before Petrova forced the contest into a third set with an ace.

Gaining in confidence, Petrova broke Stosur’s serve in the third game of the final set and held a 4-2 lead.

Stosur broke back in the eighth game to level the scores and saved a break point for a 5-4 lead.

With the tension ramping up on both players, Petrova survived two more match points to even the ledger at 5-5.

However with Stosur leading 6-5, the Australian finally won the encounter on her fifth match point when Petrova netted her return.

Stosur’s match against Petrova was the longest women’s singles contest at the tournament during the Open era.

Unlike every other grand slam, the US Open has a tie-break in the final set of a match.