Stosur progresses to US third round

Samantha Stosur has progressed to the US Open third round with a hard-fought 6-3 6-4 victory over Coco Vandeweghe. 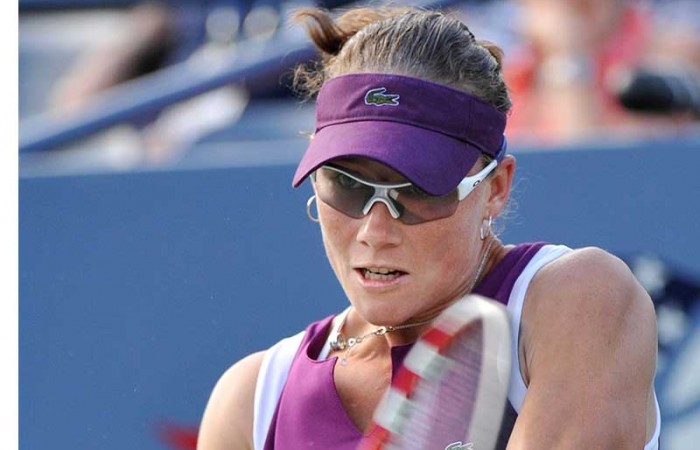 Samantha Stosur set up a US Open third round clash against Russian 24th seed Nadia Petrova following a a hard-fought 6-3 6-4 victory over big-serving American Coco Vandeweghe.

The ninth seeded Stosur was made to work for her win against the Californian teenager, needing one hour and 40 minutes to secure the result on Louis Armstrong Stadium.

Stosur’s side of the draw opened up on Wednesday when eighth seeded Frenchwoman Marion Bartoli was knocked out by American Christina McHale and Venus Williams pulled out of the tournament due to illness.

In clear, warm conditions on Wednesday, Stosur comfortably collected the opening set in 43 minutes and looked on track for an easy win at 3-1 in the second.

However, the 185cm Vandeweghe, who hails from a family that can handle the spotlight, started to find some rhythm on serve and broke Stosur’s serve for the only time in the match.

Vandeweghe’s mother Tauna was a swimmer at the 1976 Montreal Olympics and alternate for the volleyball team at the 1984 Los Angeles Games.

Her grandfather Ernie played for the New York Knicks basketball team and her uncle for a number of NBA teams.

One of her grandmothers was the 1952 Miss America and the other made the cover of Harper’s Bazaar.

But at 4-4 in the match, the world No.112 cracked in a pivotal service game that seemed to last for an eternity.

Stosur eventually forced the American into error and the Australian yelled out ‘Come on’ after watching her opponent spray a forehand long.

Serving for the match, Stosur had two double faults before settling down and sealing the match on her third match point with a low driving backhand up the line.

“I thought I played a a pretty solid match,” Stosur said.

“She is obviously can be a very dangerous player, she has big shots and big weapons.

“I think she got the momentum up once I went 3-1 up (in the second) and she started serving really well and I felt like she was almost getting on top but to get that break at 4-4 was big.”

Petrova holds a 4-1 record over Stosur but the Australian wiped her off the court 6-1 6-4 in their most recent meeting on grass at Eastbourne in June.

“That is maybe a little bit of a good thing going into this next match,” Stosur said.

“But again she can be very dangerous if she gets her serve going and her backhand is very good.”