When the Twin Towers fell, Lleyton Hewitt was travelling home with his first Grand Slam trophy, Andy Roddick was staying with his parents in Florida, Roger Federer was working out at a Swiss gym while 15-year-old Rafael Nadal was losing his first ever senior match. 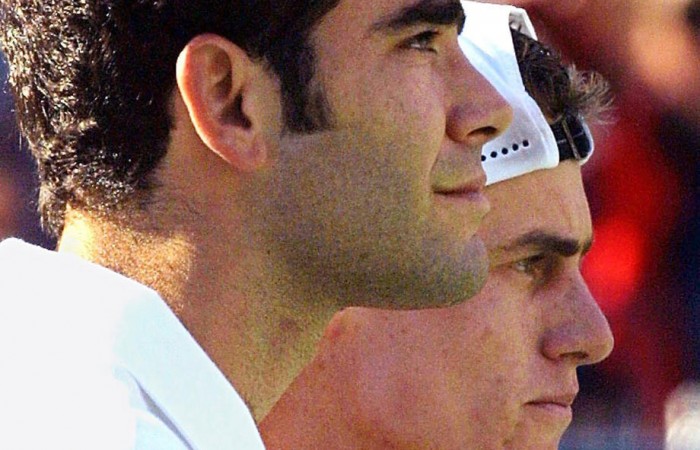 When the Twin Towers fell, Lleyton Hewitt was travelling home with his first Grand Slam trophy, Andy Roddick was staying with his parents in Florida, Roger Federer was working out at a Swiss gym while 15-year-old Rafael Nadal was losing his first ever senior match.

Almost 10 years on from the 9/11 attacks on the United States, the memories are as fresh and just as raw.

They will be in even sharper focus still at the US Open from next week with the tournament staging the men’s final on the 10th anniversary of that shocking day – Sunday, September 11.

A decade ago the men’s final was played on September 9 and Hewitt was flying back to Australia – having beaten Pete Sampras in the title decider – when the airborne terror attacks took place.

“I didn’t know until I touched down in Sydney anything about it,” recalled Hewitt in 2004. “So it was a weird feeling. You hop on a plane and, you know, the whole world’s changed in a lot of ways.”

Roddick was 19 at the time and had lost to Hewitt in the quarterfinals.

He’d planned to remain in New York for a concert, but changed his mind and headed to his parents’ home in Boca Raton.

“Like anybody else, you’re just shocked. I didn’t know what to think. You know, it was a place you were the day before. It was just really weird,” said the former world No.1 recalling the grim TV images.

“But I will say this – the six months to a year after that, I probably haven’t been prouder of the people in this country as far as the way they came together. I wish it would have had a little bit more staying power.

“Hopefully the 10-year mark will bring back some of those feelings of unity that we did have after that. You know, I don’t think it’s a bad thing to remember.”

Federer, a five-time champion in New York, was 20 at the time and had yet to pick up the first of his record 16 grand slam titles.

He had lost a round earlier than Roddick, going down to Andre Agassi, and was already back in Europe where he watched the world-changing drama occur.

“I was practicing back in the National Tennis Centre in Switzerland. I was in the gym, and someone told me something was happening,” said the Swiss.

“I went up to see the TV and was watching the whole thing unravel. It was disturbing to watch in some ways because nobody knew what was going on.

“You figure many people passed away. So every year since hasn’t been the same coming back to New York. So that’s been tough.”

Federer will be playing his 12th US Open and 10th since the tragedy, but has never been compelled to join the pilgrimage to the site in Lower Manhattan where almost 3,000 people died.

“I never went to Ground Zero. Never felt like I had to go see that place. But I’m sure they’re going to create something nice to remember all those people,” said Federer.

Nadal had only turned 15 in June 2001, and on September 11, was playing his first match as a professional in a third-tier event in Madrid.

Ten years on, he can recall the match details as well as his vivid reaction to the harrowing events in the US.

“Just after that match I saw the tragedy on TV. I was really sad about my match, because the first ATP point is always important. But, when I came back to the locker room and I saw that on TV, I forgot the match in one second.”

Earlier that year, Nadal had even joined the hordes of tourists eagerly making their way to the observation deck of the South Tower, over 100 floors above the city to take in the breathtaking views.

“I was there in the Twin Towers a few months before, at the top. On the TV, that’s one of the views that had the biggest impact on me.”

Meanwhile, US Open organisers have already said they will mark the 10th anniversary of the 9/11 attacks with a special tribute at Arthur Ashe Stadium in the Flushing Meadows complex on men’s and women’s finals day.

The inscription “9-11-01” will grace the hard court for the weekend.

“It’s to honour the heroic efforts that took place on 9/11 here in New York and around the country,” said Chris Widmaier, a spokesman for the United States Tennis Association.

“We wanted to create a ceremony that balances respect and dignity on this solemn occasion.”