Stosur, Gajdosova seeded at US Open

Australians Sam Stosur and Jarmila Gajdosova have both been seeded ahead of next week's US Open. 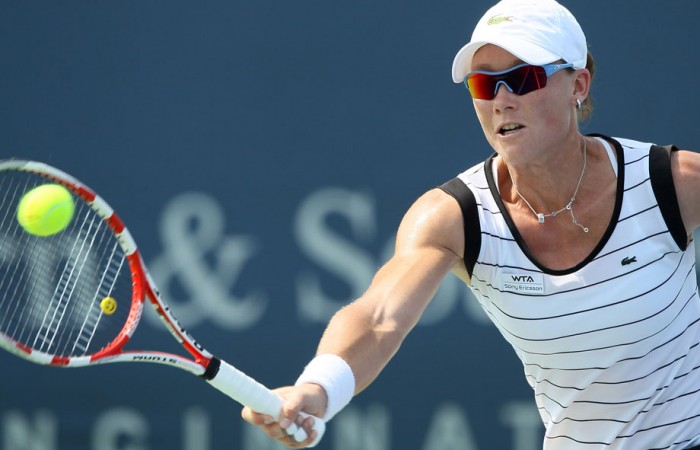 Australians Sam Stosur and Jarmila Gajdosova have both been seeded ahead of next week’s US Open.

Stosur was seeded ninth, while Gajdosova is seeded No.29.

Stosur, who reached the quarterfinals in Flushing Meadows last year, has had a good build up to this year’s Grand Slam reaching the final of the warm-up event in Toronto this month where she was defeated by Serena Williams.

The Queenslander, who is ranked No.10 in the world, then made the quarters in Cincinnati last week where she was ousted by Maria Sharapova.

Australia will have three other direct entrants in the US Open – Jelena Dokic, currently ranked No.73, Anastasia Rodionova who is just inside the top 100 at No.97 and wildcard recipient Casey Dellacqua who is on the comeback trail following an injury interrupted season.

Top-ranked Caroline Wozniacki, the 2009 US Open runner-up, is also No.1 in the women’s singles seedings announced on Tuesday, followed by Vera Zvonareva, last year’s losing finalist.

Two-time reigning US Open champion Kim Clijsters, who is ranked No.3, will miss the tournament this year with a stomach muscle injury. Fourth-ranked Sharapova, the 2006 champion in New York, moves up to third in the seedings.

Williams was this year seeded 28th for the US Open, which stuck with its policy of following the rankings instead of taking into account players’ past performances.

It means Williams could face one of the Grand Slam tournament’s top-eight seeded players as early as the third round.

The 29-year-old American has won 13 major championships, including three at Flushing Meadows – in 1999, 2002 and 2008. She recently won consecutive hardcourt tune-up tournaments at Stanford and Toronto, making her one of the favourites to win the US Open, which starts next Monday.

A former world No.1, the American is ranked 29th this week. That’s up from 175th in July, a few weeks after she returned to the tour following nearly a year off because of a series of health problems.

“After careful deliberation regarding Serena Williams’ seeding, we decided to maintain the objective criteria in place to determine the women’s singles seeds at this year’s US Open,” tournament director Jim Curley said in a statement released on Tuesday by the US Tennis Association.

In the past, Grand Slam tournaments have taken into account factors other than the official rankings when determining seedings.

At the most recent major tournament, Wimbledon, two-time defending champion Williams was moved up to No.7 in the seedings, 19 spots higher than her ranking at the time, even though it was only the second tournament of her comeback. She wound up losing in the fourth round at the All England Club.

Her older sister Venus, a five-time Wimbledon champion, also was bumped up in the seedings there. But Venus Williams isn’t seeded at all for the US Open, which she won in 2000 and 2001; she’s ranked 36th this week.

The men’s seedings are to be announced on Wednesday, and the draw for the year’s last Grand Slam tournament is Thursday.