The Parliament House tennis courts were alive to the sweet sounds of MLC Tennis Hot Shots and Cardio Tennis this morning. 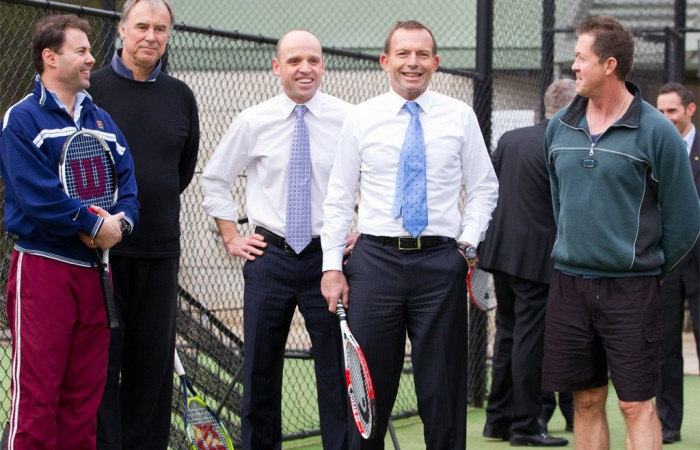 The Parliament House tennis courts were alive to the sweet sounds of MLC Tennis Hot Shots and Cardio Tennis this morning.

Some of the nation’s leading political lights, a handful of former greats and a host of exuberant Canberra school children took to both programs with loads of zest in front of a gathering of national media.

Board members, coaches and staff from Tennis Australia and Tennis ACT ran this morning’s exercise to help promote the benefits of the sport.

“Hot Shots is about ensuring every kid has the opportunity to play tennis …We want to give kids a lifelong love of sport. We know the benefits physically, we know the benefits of fighting obesity and we know the life skills young kids pick up through playing sport,” Senator Arbib explained afterwards.

“So I congratulate Tennis Australia for all the work they have been doing. It really has been a determined effort and we’re also seeing new programs like Cardio Tennis to ensure everybody gets an opportunity to play,” he added.

MLC Tennis Hot Shots has already attracted more than 248,000 participants in the past 12 months. Cardio Tennis will be a great way for people of all ages and abilities, particularly time-poor young adults, to enjoy tennis as a fitness program.

“Tennis is a terrific social sport, it is one of those sports that everyone can be involved in, no matter what age,” Mr Abbott said.

“You don’t need to be blokes playing blokes or girls playing girls. Tennis is something the whole family can get involved in, and that’s why I think it’s such a great sport to encourage … I think it’s a very worthy cause that we support here this morning,” he added.

The next generation of Australian players have already started showing their dominance, with Ashleigh Barty (Qld) and Luke Saville (SA) winning the 2011 Wimbledon junior girls’ and boys’ titles respectively.

“We would love to see every child with a racquet in their hand and adults rediscovering the joys of tennis through Cardio Tennis,” Steve Wood, CEO of Tennis Australia said.