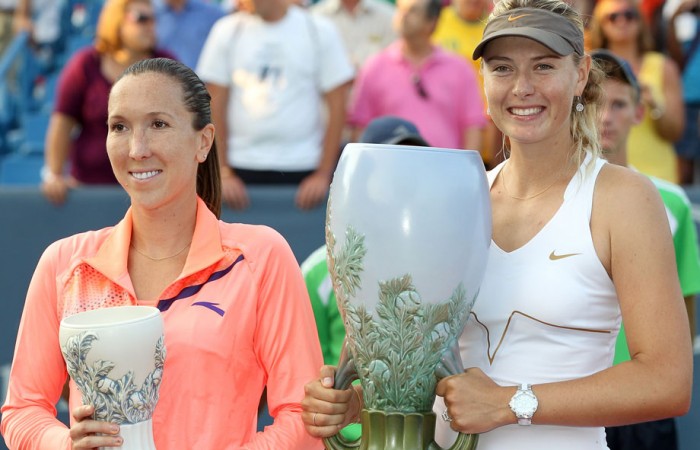 Sharapova, 24, earned her second title of the season after a triumph in Rome.

The Russian improved on her runner-up finish to Kim Clijsters in the same event last year and gave herself a momentum boost prior to the US Open, the final Grand Slam of the season that starts on August 29 in New York.

But it was no easy matter.

After an aggressive start saw Sharapova take a 4-1 lead, Serbian Jankovic went on a roll, breaking the Russian three times in a row and taking the opening set when Sharapova double-faulted.

The shift recalled last year’s final, when Sharapova failed to convert three match points against Clijsters and ended up losing 2-6 7-6(4) 6-2.

Despite a stream of unforced errors – including a total of 11 double faults – Sharapova finally took the second set, winning the last five points of the tiebreaker.

The third set started with six straight breaks of serve before Sharapova held for a 4-3 lead.

Jankovic double-faulted twice to surrender the next game, leaving Sharapova to serve out the match after two hours and 49 minutes.

Jankovic, who has battled back, wrist and ankle injuries, was playing in just her second final of the season, after her runner-up finish in Monterrey.

With her game in shape, this week appeared to offer her a golden opportunity thanks to a wealth of injury absences.

Clijsters withdrew with the abdominal strain that will keep her from trying for a third straight US Open title.

Venus Williams was sidelined by a virus, Serena Williams pulled out early with a toe injury and a hand injury forced out third-seeded Victoria Azarenka.

Jankovic reached the semifinals on a walkover when China’s Peng Shuai withdrew with a hip injury.