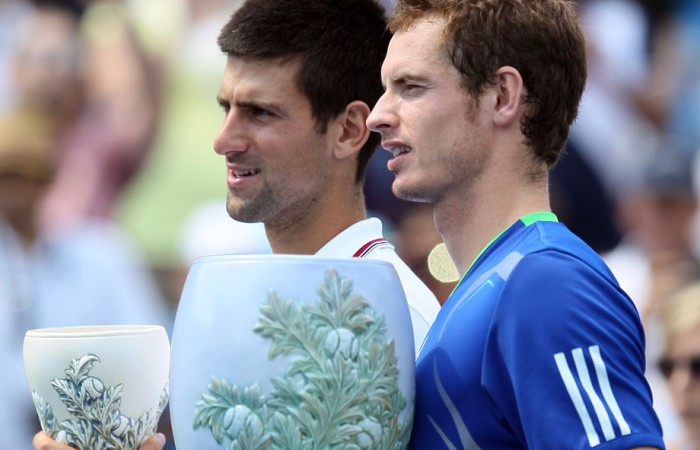 Djokovic conceded just his second defeat of the season against 57 victories.

He was hindered during the match by a sore right shoulder, a problem Djokovic had alluded to after his abbreviated victory over similarly ailing Tomas Berdych in the semi-finals on Saturday.

“Obviously when he started to slow down his serve toward the end of the first set it was going to be tough for him,” said Murray, who also win in Cincinnati in 2008. “Sometimes things can warm up when you play, sometimes they get worse. I just tried to stay focused.”

Murray made the most of Djokovic’s sluggish start to grab an early break. The Serbian managed to break back but his painful shoulder clearly affected his serve late in the first set.

He received treatment after the first set but in the second he appeared to have trouble even reaching for overheads and called it a day – no doubt with the start of the US Open on August 29 in mind.

“Not the way I wanted it to happen,” Murray said of becoming just the second man to beat Djokovic in 2011.

“I had a chance, served for the match against him in Rome and lost – that was a tough one for me. It’s nice to win, but I’d rather beat him in three weeks’ time.”

That time frame would have Murray facing Djokovic across the net in the US Open final in New York, and the Scotsman said his week in Ohio had encouraged him heading into the final Grand Slam of the season.

“I’ve hit the ball better and better as the week went on,” he said.