Sam Stosur has applauded Serena Williams' remarkable comeback from injury after the American claimed her second title from four events in Toronto. 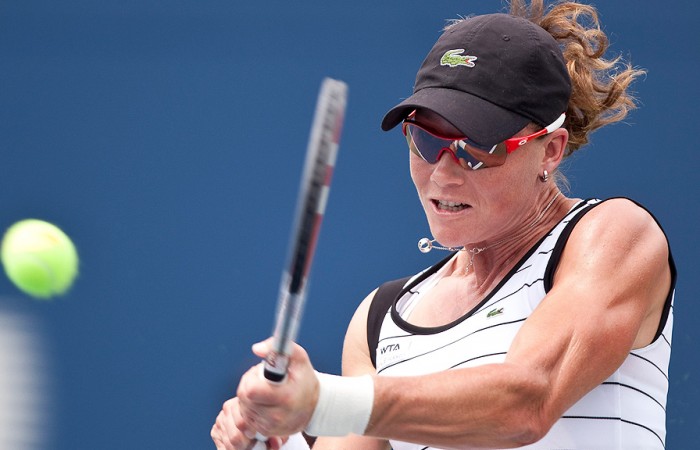 Sam Stosur has applauded Serena Williams’ remarkable comeback from injury after the American claimed her second title from four events in Toronto.

Stosur admitted hoping a forecast thunderstorm would arrive as she succumbed to Williams in the final of the WTA Rogers Cup.

Former world No.1 Williams hammered home her credentials as favourite for the US Open in two weeks’ time as she claimed her second title from four events since being sidelined for 49 weeks by injury and illness.

She fired nine aces and won 89 per cent of her first serve points while brushing past Australian Stosur in just 77 minutes at the AUD$1.98 million hardcourt tournament.

Thunderstorms were expected but never materialised during the final.

“If you are losing, you kind of hope [the rain] does come to maybe stop and get a bit of a break,” Stosur said.

Stosur applauded the progress Williams has made in the eight weeks she’s been back on the court.

“She makes it look very easy, and it’s not that easy to just come back on tour and win two events in your first four tournaments,” Stosur said.

“I think she’s playing very well. To win a tournament like this, you have to be playing well.”

The 29-year-old Williams is currently ranked a lowly 80th in the world but she showed she’s back near her best as she claimed her 38th career title, a tally which includes 13 grand slam crowns.

“Being down the way I’ve been down and coming back, it was cool,” Williams said.

Williams was sidelined just days after her Wimbledon victory last summer, first with a foot injury sustained when she stepped on a piece of glass in a restaurant in Germany, and then with blood clots in her lungs.

The American, who won the Stanford Classic two weeks ago, has talked since her return about a change in philosophy, focusing on just having fun. But she was all business Sunday in front of a nearly full Rexall Centre crowd.

She broke the 27-year-old Stosur to go up 5-4 in the opening set with a blistering backhand, and would break her twice more in the second, winning in emphatic fashion with her ninth ace.

Williams was asked if she ever had any doubt during her long layoff about whether she would be able to return to tennis.

“Never. Never once. No,” she answered.

She said she’s looked to Kim Clijsters for inspiration. The Belgian retired to have a baby, then returned two years later to win the U.S. Open in her third tournament back.

“I just hope I can do half as good as she did. She won the Open two years in a row now. I’m hoping to get close to there, that title.”

Williams is projected to rise to No.31 in the next rankings.

“I consider myself a favorite to just do what I can do best, if that means winning the US Open, obviously I want to,” she said.

“I went through a lot of things physically and mentally and emotionally, and going through so much, I’m just taking it one day at a time and just going with it.”

Toronto rapper Drake was among fans at the match and Williams bristled in the post-match news conference when asked to respond to rumours about their relationship.

“Oh man, really?” Williams said. “So much speculation. It’s unbelievable. Shocking, really. It’s too much. It’s really too much. We’re really good friends. I guess you can’t be too close of a friend nowadays.”

The player was otherwise in a joking mood, chuckling about her age and the fact 10 years had passed since she won her previous Rogers Cup title.