Samantha Stosur has progressed to the second round of the Rogers Cup in Toronto with a a 4-6 6-2 6-3 win over Japan's Ayumi Morita. 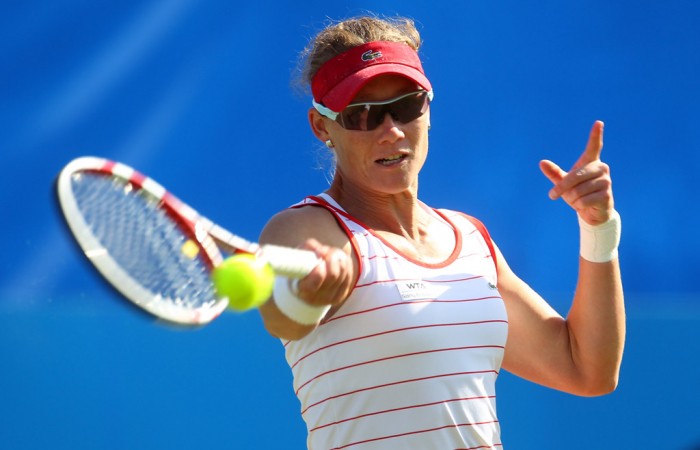 Samantha Stosur has progressed to the second round of the Rogers Cup in Toronto with a a 4-6 6-2 6-3 win over Japan’s Ayumi Morita.

Morita took the first set in a match that lasted almost two hours, with Stosur given a stern test after her sluggish start.

Stosur, who dropped out of the top 10 on Monday for the first time since April of last year, is hoping for another productive hardcourt season after reaching the quarter-finals of the US Open last year.

The tournament’s 10th seed showed improvement and more aggression in the match’s last two sets, as she battles to overcome a form slump that was underlined by an opening round exit at Wimbledon.

Stosur will meet the winner of Tuesday’s match between Aleksandra Wozniak of Canada and Shahar Peer of Israel.

Kazakhstan’s Voskoboeva, currently ranked 135th in the world after reaching a career high of 64th in February of 2009, arrived in Toronto after reaching the first semi-final of her career at Baku, Azerbaijan, in July.

Bartoli, ranked ninth in the world and seeded ninth, had trouble with her serve and double-faulted four times.

The top eight seeds at this US Open tuneup have first-round byes.

The talent-laden field is led by world No.1 Caroline Wozniacki, trying to get back on track after early exits at Roland Garros and Wimbledon.

World No.2 Kim Clijsters is the second seed but has played just two tournaments in the past four months as she battled a string of injuries to her shoulder, wrist and ankle.

In the second round she’ll face China’s Zheng Jie, a 6-2 6-1 winner on Monday over fellow qualifier Alberta Brianti of Italy.

The field also includes 13-time Grand Slam champion Serena Williams, who is unseeded after returning from an absence of nearly 11 months because of injury and illness.

She cemented her return by lifting the title in Stanford a fortnight ago.