Big-serving Australian Chris Guccione was knocked out of the $US1.4 million ($A1.3 million) ATP Washington Classic. 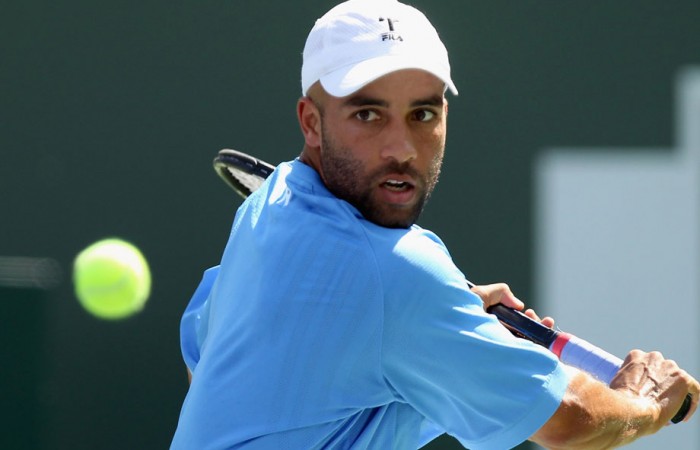 Big-serving Australian Chris Guccione was knocked out of the $US1.4 million ($A1.3 million) ATP Washington Classic after a tight 3-6 6-2 7-6 loss to South African world No.37 Kevin Anderson.

Guccione, who entered the tournament as a qualifier, fought back from a set down but was unable to produce his power serving in the match’s deciding tie-break, which he lost 7-0.

The 26-year-old world No.224 had nine aces for the match, but only two came in the third set, where he hit 50 per cent of his first serves.

Blake, who has won two matches at an ATP event for only the second time this year, has risen from 173rd to 90th in the rankings since March.

The 31-year-old American fired seven aces while hitting 62 per cent of his first serves.

“That’s the best I have served in probably two years,” Blake said.

“Today was a whole level better than yesterday, and it had to be.”

Argentina’s Nalbandian, a former World No.3, slid to 27th after surgery earlier this year to repair a hernia and torn left leg muscle.

He managed to connect on only 49 per cent of his first serves.

“It was tough. Second set I served better but a little late. I was OK. I just need matches to be in good shape again.”

Blake broke in the second and fourth games of the first set and again to open the second set. He denied Nalbandian on all three of his break point chances to win after 72 minutes.

“Sometimes it doesn’t matter how well you play, he’s going to take the racquet out of your hands,” Blake said. “It’ll be another time to keep plugging away, wait for my opportunities, take something away from them.”

Devvarman, a 26-year-old who last week was ranked a career-best 62nd in the world, will next face seventh-seeded Cypriot Marcos Baghdatis, last year’s Washington runner-up.

American Ryan Sweeting put himself into the path of French top seed Gael Monfils with a first-round triumph.

Sweeting ousted countryman Alex Bogomolov 6-2 6-4 in the first round of the US Open hardcourt tune-up event to reach a second-round date Wednesday against seventh-ranked Monfils, among 16 players to receive an opening-round bye.

“Definitely the fastest person I’ve seen in most sports,” said Sweeting. “I’m going to have to play well and stay aggressive. It’s going to be a tough match. If I hit a great shot, I’ve got to expect it’s coming back at me.

“If I just sit back, he’s going to run for days and make me look like an idiot.”

Chilean Fernando Gonzalez pulled out with knee tendinitis and was replaced by Bosnian Amer Delic barely 90 minutes before a first-round match with German Tommy Haas, who advanced 6-2 6-3 in his continuing comeback from hip surgery.

“The movement and confidence is still not where I would like it,” former world No.2 Haas said.