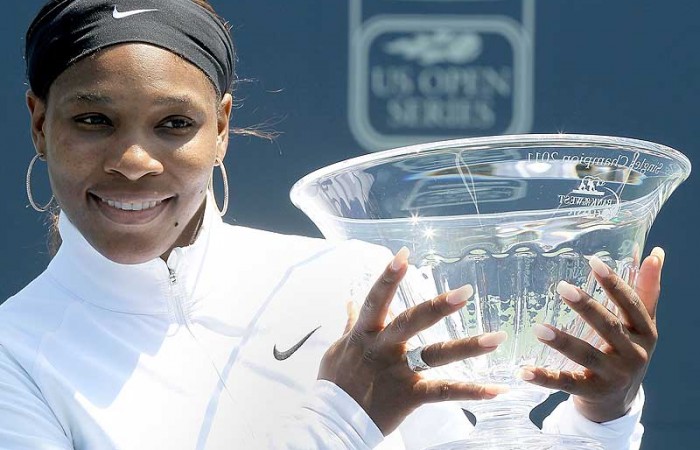 Former world No.1 Serena Williams surged past Marion Bartoli 7-5 6-1 on Sunday to win the WTA Stanford crown, signalling her US Open intentions.

The 13-times grand slam champion, who is battling to rebuild her ranking after a layoff of almost a year for foot surgery and a health scare, claimed her first title since Wimbledon 2010.

“Coming back and hearing the claps when I walk out there are moments that I truly missed,” Williams said. “It’s so awesome to be back and to be a part of those moments.

“Not everyone can be a sports – I don’t know if ‘star’ sounds full of myself – but I’ve worked hard for that title.

The American was twice down a break in the opening set, but broke Bartoli as the French third seed served for the set at 5-4.

That launched a roll of eight straight games to the American as she pocketed the first set and took a 5-0 lead in the second.

After Bartoli held serve for 5-1, Williams served out the match after one hour and 22 minutes.

With the victory, Williams avenged her fourth-round loss to Bartoli at Wimbledon and showed that even though her ranking has plummeted, she will be a contender at the last grand slam of the year starting in New York on August 29.

Williams has already elected to use an injury-protected ranking to gain entry to the US Open main draw, the US Tennis Association said this month.

The system allows a player who has been sidelined for six months or more by injury to use a special injury-protected ranking to enter up to eight tournaments, including one grand slam.

Williams missed almost a year after suffering a cut foot that required surgery shortly after her 2010 Wimbledon triumph, an injury that was later followed by dangerous blood clots in her lungs.

With her win, she’ll boost her ranking from 169th in the world into the top 80.

“I hated those triple digits,” she said with a laugh. “Now I’ve got to get to single digits.”

Her progress to the final included a dominant 6-1 6-3 quarter-final victory over former world No.1 Maria Sharapova, this year’s Wimbledon runner-up, and a victory over Wimbledon semi-finalist Sabine Lisicki in the semis.

She faced a well-rested opponent in Bartoli, who reached the final on a walkover when Slovakia’s Dominika Cibulkova withdrew because of an abdominal strain.

Bartoli said a bruise in her right hand began to bother her in the opening set, affecting her grip on the racquet, but didn’t cost her the match.

“I knew before the match started it was different than Wimbledon.”

Williams stayed calm in the face of Bartoli’s early aggression, but the American had some trouble with the sun in some of her service games.

After falling behind 4-2, Williams broke back to level the set at 4-4 before Bartoli broke again to have a chance to serve for the set at 5-4.

From there, however, it was all Williams.

“I’m sure she’s going to tell you that she can play even better,” Bartoli said. “And I’m sure that she will.”