Defending Davis Cup champions Serbia shrugged off the absence of Wimbledon winner Novak Djokovic to wrap up a 4-1 win over Sweden. 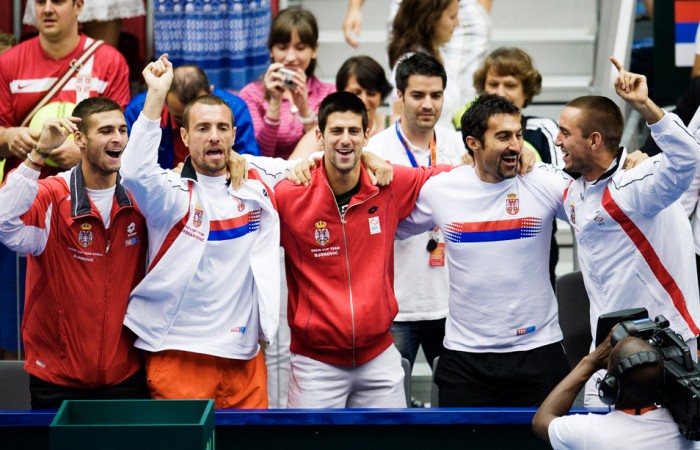 Defending Davis Cup champions Serbia shrugged off the absence of Wimbledon winner Novak Djokovic to wrap up a 4-1 win over Sweden and book a semi-final against Argentina.

“It feels really good. I know that Serbia was a huge favourite with Robin (Soderling) not here and with Novak,” said Tipsarevic, who had played two singles rubbers instead of world No.1 Djokovic.

Ryderstedt, who was playing his first Davis Cup with a world ranking of 297, had put up a good fight but lost to Viktor Troicki on Friday in the first rubber.

Tipsarevic then gave Serbia a 2-0 lead, getting past Ervin Eleskovic when the home player retired injured.

The hosts did see their hopes rekindled on Saturday when Simon Aspelin and Robert Lindstedt won the doubles rubber in straight sets, defeating Djokovic and Nenad Zimonjic, who ranks sixth in the world for doubles.

But on Sunday, Tipsarevic, again deputising for Djokovic who had complained of a knee problem on Friday, had the upper hand, breaking Ryderstedt six times en route to victory.

Tipsarevic knows Serbia will have a fight on their hands if they are to advance to the final for a second year running and thinks that David Nalbandian holds the key to Argentina’s fortunes in the competition.

“If David Nalbandian comes in really good shape then I feel it’s going to be really, really tricky,” said Tipsarevic.

“Whichever surface we choose, I think it’s going to be a really tough match.”

Argentina coach Tito Vazquez said his team will be tested to the limit in Belgrade where Serbia won their first Davis Cup last December.

“It’s a difficult match, a very solid team. We’ll try to do our best, give them a good fight,” he said.

Juan Monaco, who won both his singles rubbers in Buenos Aires against Kazakhstan, insists it would be a mistake just to concentrate on Djokovic.

In Stuttgart, France completed a 4-1 win over Germany.

Philipp Petzschner saw off Michael Llodra 6-3 6-4 for his team’s only point of the weekend, with Jo-Wilfried Tsonga then defeating Philipp Kohlschreiber 7-6 (7-3) 7-6 (7-5) to wrap up the quarter-final.

France will play Spain in the semi-finals after the Spaniards routed the US 3-1.

Sixth-ranked Ferrer celebrated by falling backwards on to the court when Fish’s final shot sailed wide. He then leaped into the arms of Spanish team captain Albert Costa.

“This is a historic victory for us because we have never won before in the United States,” said Costa.