Australia has won the Davis Cup Asia Oceania Round Two tie against China. 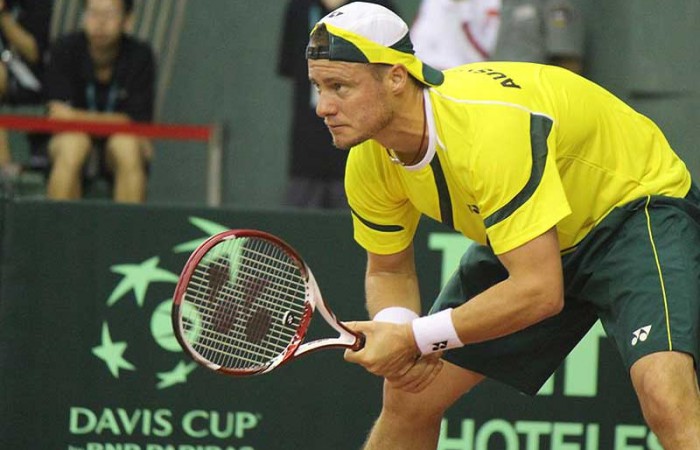 Lleyton Hewitt had to dig deep to snuff out a valiant Chinese comeback in Beijing this afternoon and steer Australia into the Davis Cup by BNP Paribas World Group Playoff in September.

Hewitt dropped just three games in taking the first two sets before Zhang Ze staged a remarkable comeback, roaring back into life and bringing a noisy 2000 plus crowd at the indoor Beijing International Tennis Centre with him.

But Australia’s most successful Davis Cup player managed to serve strongly and win the big points to finally close out an absorbing contest 6-2 6-1 4-6 7-6(2).

Hewitt was subbed into the singles for Marinko Matosevic this morning and his victory gave the Australians an unbeatable 3-1 advantage in their Asia Oceania Zone Group one second round tie with both teams opting not to play the fifth match.

Hewitt’s Davis Cup record now stands at 46-12, the greatest in Australian tennis history and, incredibly, he has only ever lost one match on hard court in 31 ties over 13 years.

Australian captain Pat Rafter was full of praise for both Hewitt and the Chinese team.

“If any of our guys or any  kids (back home) got to see what was out there on that court today they would understand what it takes to be a player and what it takes to represent your country. That out there was from both sides – from theChinese side and  Lleyton here- that’s what toughness is all about. You do whatever it takes to win.”

Hewitt looked in complete command in the first two sets, winning them easily.

“(I)Had a slight dip of intensity and concentration at the start of the third set but to Zhang Ze’s credit he fought extremely hard from then on in and changed his game plan and played well for the next two sets and I was happy to get out of it in the fourth set,” he said later.

“He came out there (after losing the first two sets) with nothing to lose basically. His focus was pretty much to go for everything as hard as he could, swing at the hip and a lot of it went in.”

The Australian team’s focus now turns to the World Group Playoff and they will find out their opponent at the draw early next week.

“We’ll know on Tuesday who we’ll play and then we’ll make our call on what surface and what place …it will depend on who we play…obviously if we are away there is nothing we can do about it, but if we are at home we can pick the surface,” Rafter said.