Davis Cup round up: trouble for USA 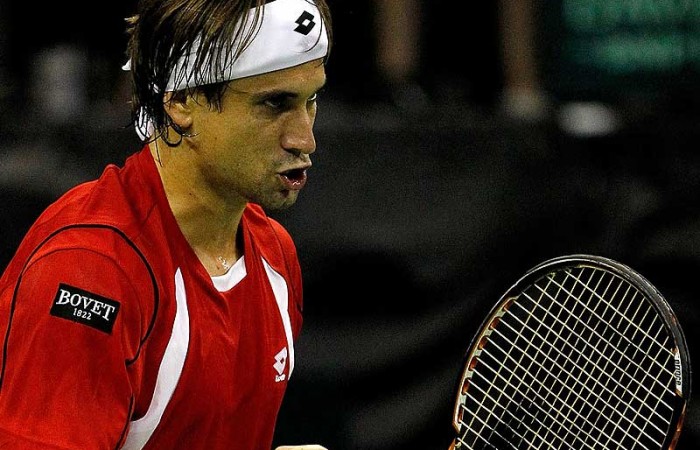 World No.6 David Ferrer defeated 10th-ranked hometown hero Andy Roddick to give Spain a 2-0 lead on Friday after the opening day of their Davis Cup quarter-final tie.

The Spaniards, seeking their third trophy in four years, moved to the brink of victory in the best-of-five matchup when Ferrer downed Roddick 7-6 (11-9) 7-5 6-3.

The Americans need a victory from the world’s top-ranked doubles squad, brothers Mike and Bob Bryan, over Lopez and Fernando Verdasco on Saturday to keep their hopes of advancement alive.

Opponents will be reversed in Sunday’s singles matches and the Americans would need to win both of those as well as the doubles to deny the Spaniards, who won titles in 2004, 2008 and 2009.

The Spanish are playing without World No.2 Rafael Nadal, who pulled out of the tie in order to rest after reaching the Wimbledon final.

In other World Group results:

Davis Cup holders Serbia shrugged off the injury-enforced absence of Wimbledon champion Novak Djokovic to take a 2-0 lead over Sweden.

Viktor Troicki beat Michael Ryderstedt 6-3 6-1 6-7 (6-8) 7-5 in the first singles rubber, just hours after new world No.1 Djokovic pulled out of his rubber against Ervin Eleskovic citing a knee injury.

World No.29 Janko Tipsarevic stepped in for Djokovic and enjoyed a comfortable second rubber when debutant Eleskovic, the world 355, retired with a knee injury after the Serb had established a 6-2 1-0 lead after just 44 minutes.

Argentina reached the Davis Cup semi-finals on Friday after Juan Ignacio Chela and Eduardo Schwank won their doubles rubber to establish a winning 3-0 lead over Kazakhstan.

Chela and Schwank raced past Yuriy Schukin and Evgeny Korolev 6-3 6-2 7-5 to put the encounter to bed and set up a September meeting with either holders Serbia or Sweden.

Former US Open champion Juan Martin Del Potro and Juan Monaco had set up the win on Thursday in easily winning their opening singles against Mikhail Kukushkin and Andrey Golubev.

And in zonal competition, Roger Federer overcame early problems to beat Portugal’s Rui Machado and guide Switzerland to a 2-0 lead. Federer’s service was broken twice in the opening set by the 93rd-ranked Machado before he recovered to win 5-7 6-3 6-4 6-2 in the Group I second round match.

Federer and Wawrinka are scheduled to face Gil and Leonardo Tavares in Saturday’s doubles rubber. The contest is being played on indoor hard courts in Bern, Switzerland.