Lleyton Hewitt and Chris Guccione have put Australia ahead 2-1 in the Davis Cup tie against China. 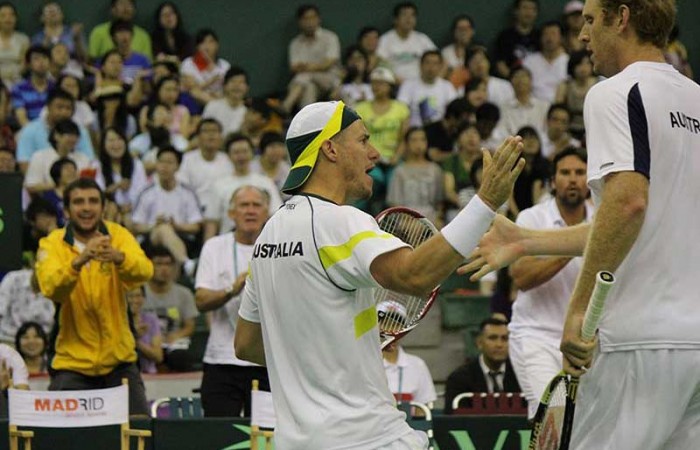 Lleyton Hewitt and Chris Guccione have put Australia ahead 2-1 in the Davis Cup by BNP Paribas Asia Oceania Round Two tie in Beijing.

A passionate display by the Aussies saw the pair ride over Chinese Maoxin Gong and Zhe Li 6-4 6-4 6-4.

Between Guccione’s big serves and Hewitt’s returning powers, the Chinese combination were unable to stem the determination of the visiting nation, who have seized the advantage in this tie.

Now leading 2-1 overall, Australia is set to start with Bernard Tomic in Sunday’s reverse singles against Di Wu. Australian Davis Cup captain Patrick Rafter said he would wait until Sunday morning to see if Hewitt’s foot was able to carry him into the second reverse singles.

Hewitt said he and Guccione had a game plan and executed beautifully. “Chris and I play extremely well together and we have a lot of confidence in each other, we were pretty happy with the way we went today, our intensity was fantastic,” Hewitt said.

Hewitt said he loved playing in China, having achieved the world No.1 ranking in 2002.

“Always great to come back to China and play I’ve got very good memories of winning the Masters Cup and reclaiming the No 1 ranking in 2002.”

Follow the Aussie team’s progress as they tackle China in their must win Davis Cup tie in Beijing.