Beijing blog: putting on a clinic

The Australian Davis Cup team is winning over some local fans in Beijing. 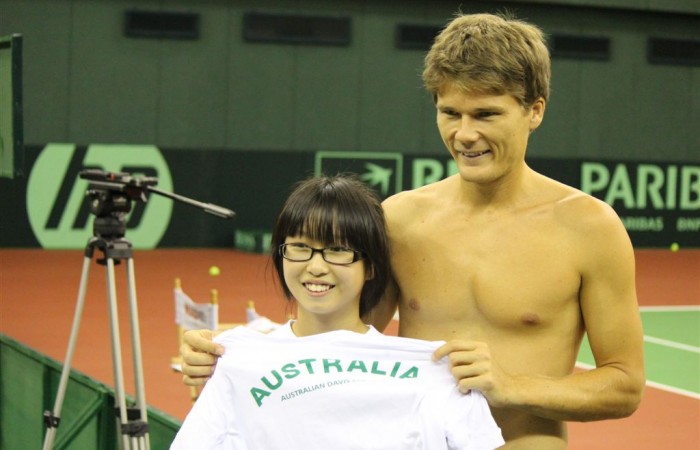 There is a lot to like about this Australian Davis Cup team.

Coach Tony Roche is on one court taking a line of eager Chinese youngsters through a volleying drill. On centre court, captain Pat Rafter is doing a similar drill with even smaller kids. And over on the third court Bernard Tomic and Peter Luczak are playing some fun points with two lines of boys and girls on the baseline.

They are alongside members of the Chinese Davis Cup team and there is no shortage of laughter and easy smiles.

Yet minutes earlier at the official draw, the Australians revealed that they would be holding Lleyton Hewitt back from the first day of singles to ensure he was right for the doubles.

It would have been a decision of much deliberation for the new captain and his team. But for all intents and purposes they look to have made the decision comfortably.

Maybe that has been helped by the practice form of Hewitt’s replacement Marinko Matosevic.

Still, here they are out on court helping to spread the tennis gospel.

The Davis Cup planning that must have been constantly on Rafter’s mind for the last couple of months is put aside momentarily as he urges a little girl to swing big and is greeted with a beaming smile.

Tomic meanwhile plays up to some of the youngsters with a high leaping forehand and numerous demonstrations of that deft touch of his.

Roche encourages and smiles. Offers some good advice on footwork and then feeds a ball to the next in line.

Luczak announces to all the kids that if they can win two points off him and Tomic, he will give them his Australia Davis Cup t-shirt. “Astonishingly” on the last point of the morning, a young girl all of about 12, keeps the ball in court and manages to elude her playful opponents to score the prize.

And so it all comes to an end and the delighted group thank their very special coaches for a clinic that they will be able to one day tell their own children about.

All for the good of the sport of tennis. Yep, a lot to like about these guys.