Australia is just a day away from naming a dream Davis Cup singles combination of Lleyton Hewitt and Bernard Tomic. 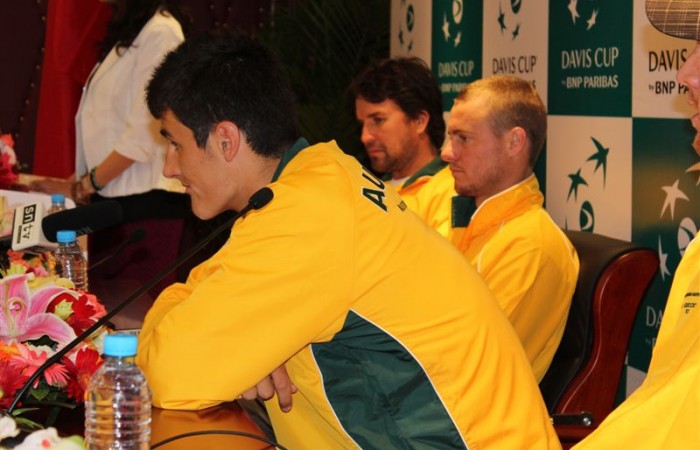 Australia is just a day away from naming a dream Davis Cup singles combination of Lleyton Hewitt and Bernard Tomic.

Both players practised strongly again yesterday and are due on court this afternoon to put the finishing touches to their preparation for their Davis Cup by BNP Paribas tie against China at the Beijing International Tennis Centre starting Friday.

Australia needs to win to earn a berth in the World Group Playoff in September.

Both players have stressed how important Davis Cup is to them and backed it up with some rigorous on-court work in the lead up.

“Obviously it still means a lot otherwise I wouldn’t be here,” Hewitt told  a throng of local media before again stressing that the team goal for this year was to win this tie and then climb back into the World Group for next year.

Asked yet again how long he thought he had left in the game he joked:  “Until the Crows win the next premiership I reckon!”

Tomic said he had recovered from his Wimbledon heroics and was focused purely on Davis Cup success.

“I’m rested and ready to go for the tie, what a great honour to be here for my second tie and I can’t wait to play.”

Davis Cup Captain Pat Rafter is happy with the progress of his two likely singles players but will not confirm his final line-up until the official draw on Thursday morning.

“They [China] play very well in Davis Cup and they had a very good win against Chinese Taipei, I expect them to be very tough and a very disciplined team.”

The Australians got their first look at their opponents on the practice court yesterday.

China has named a young team headed up by 19-year-old Di Wu (ranked No.409) who was one of the heroes of their Asia/Oceania first round win over Chinese Taipei when he beat world No.57 Yen-Hsen Lu 9-7 in the fifth set.