Australian Davis Cup circa 2011 ushers in a new era in a long and illustrious history. 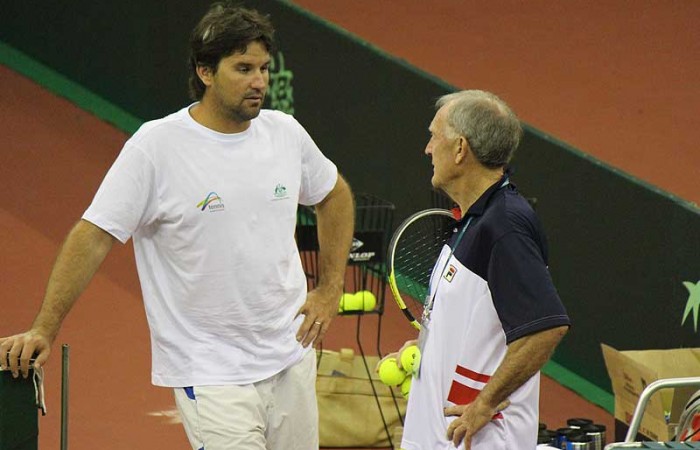 Three green hard courts, side by side. Indoors.

Over on the far side is the legendary Tony Roche. He’s constantly dipping into a box of Australian Open Wilson balls, feeding them rapid fire as he whips a pair of old mates in Chris Guccione and Peter Luczak through their paces. Occasionally he will stop for a quick word but then it is straight back into it. Feed, whack, whack, volley, volley, move, move, feed again…

In the middle on the match court is a very familiar face. Former world number one Lleyton Hewitt mustering his trademark intensity as he puts to the test a young Melburnian who the great John Newcombe has tipped could become a top 40 player. Marinko Matosevic brings a joy and a robustness to his play that is easy to like. It is an absorbing contest. Neither is holding back.

And on the third court, two Queensland youngsters have just arrived. Straight off the plane they are warming up and clearing away a few of the cobwebs. Bernard Tomic and Ben Mitchell appear relaxed, albeit a tad tired having just come in from London, but very much at ease in this environment.

Walking in between all three courts, pausing to observe, offer a word or two of advice or consult with Roche or other team staff… another very familiar face. There are no signs of any of the burden of his new job. Indeed former world number one and team captain Pat Rafter  looks very much at ease.

Welcome to Beijing and yep,  this is Australian Davis Cup circa 2011. A new era in a long and illustrious history. An era blending the old and the new. A nice mix of proven and potential, both on court and alongside it.

All of this has been coming for some months now. But now it is set against the backdrop of Tomic’s stunning Wimbledon run to the quarterfinals and the historic junior boys’ and girls’ Grand Slam title wins of Luke Saville and Ash Barty.

There has been much discussion within the team about the success of the youngsters and, one senses, more than a hint of pride.

For the extremely attentive Australian tennis fans of late there have been a few telltale signs of some progress.

Mitchell won a Futures title in Spain a couple of weeks ago, James Duckworth made another final last week and won two Futures titles in the last two months, Matt Reid won a Futures on the weekend. Saville also made the Australian Open junior final earlier in the year. All critical progressive steps for the next wave of young talent.

As Saville noted after his Wimbledon success: “I think we have a good environment in Australian tennis right now.”

Now the focus turns to a humid indoor venue in downtown Beijing … the venue from which Rafter, Roche and Co. hope to begin their nation’s Davis Cup resurrection against a feisty group of highly competitive but largely unheralded Chinese players.

So while there is a little bit of momentum, this next step on the weekend is bordering on critical.

But casting a glance across the frenetic activity at the Beijing International Tennis Center this afternoon, one senses that the right people are in place both on court and sitting alongside it, to give this proud tennis nation the very best chance of taking it.