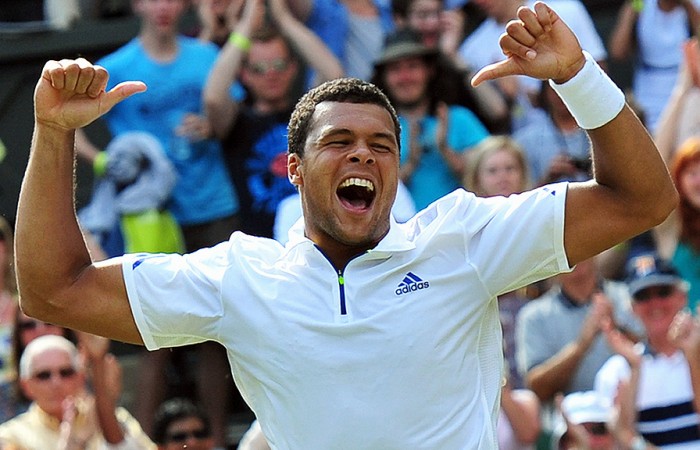 France’s Jo-Wilfried Tsonga bludgeoned Roger Federer to an historic defeat to reach the Wimbledon semifinals Wednesday, as the Swiss star suffered his first ever grand slam loss after being two sets up.

The sensational 3-6 6-7(3) 6-4 6-4 6-4 result condemned six-time champion Federer to his second successive quarterfinal defeat at the All England Club.

It will also spark more doubts over the 29-year-old’s ability to add to his 16 Grand Slams — the last of which came at the 2010 Australian Open — and cast a shadow over his bid to match Pete Sampras’s record of seven Wimbledon titles.

For 26-year-old Tsonga, it will be his first Wimbledon semifinal spot where he will tackle world No.2 Novak Djokovic for a place in Sunday’s final.

Incredibly, there were no signs of the drama to come as Federer, who went into the match with a 4-1 winning record over the 12th seed, was in majestic form early on.

He cruised through the first set on Centre Court courtesy of a break in the second game, which turned out to be his only break of the afternoon.

The Swiss was in such dominant form that the opener took just 27 minutes with the former champion firing 12 winners, remaining error-free in the process.

Tsonga, playing in his second successive Wimbledon quarterfinal, was more solid in the second, but buckled in the tiebreak which Federer was never going to relinquish once he had taken a 5-1 lead.

But the Frenchman, whose career has been blighted by a series of injuries, broke for the first time to lead 2-1 in the third set with a searing forehand down the line.

He then held his nerve in the 10th game where he needed a fourth set point to cut the deficit.

Tsonga was now in the ascendancy and broke to lead 2-1 in the fourth set as Federer, who had lost just two service games in his previous four rounds, was being out-hit by his muscular opponent.

A 14th ace from Tsonga gave him the set 6-4 and the quarter-final was all-square.

Federer was almost on his knees, broken again to trail 1-0 at the start of the decider before Tsonga surged away to capture a famous win in the 10th game when the former world number one wearily mis-hit a service return.