Bernard Tomic handed Novak Djokovic a fright before the Serbian star ended the Australian's fairytale run at Wimbledon with a four-set quarterfinal win. 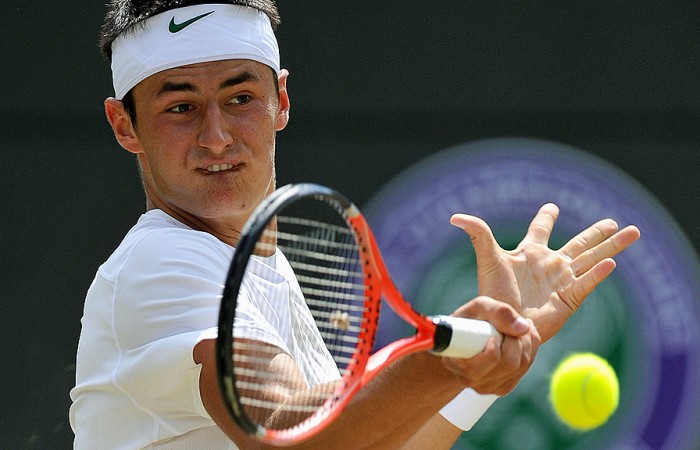 Bernard Tomic handed Novak Djokovic a fright before the Serbian star ended the Australian’s fairytale run at Wimbledon with a four-set quarterfinal win.

The two-time Australian Open champion battled to find answers at times against the teenager before negotiating his way to a 6-2 3-6 6-3 7-5 victory.

At one set apiece and leading 3-1 in the third set, Tomic looked to be on track for a massive upset but his game temporarily went missing and Djokovic seized his opportunity.

Tomic, the youngest men’s player in the final eight since Boris Becker ruled SW19 in 1986, showed he was capable of mixing it with the world’s best player this year.

He exits the All England Club with a ranking in the low 70s, a handy STG137,500 (AUD$209,000) heading towards his bank account and sponsors keen to hitch themselves to his wagon.

His performance and ranking will open doors for him.

A win over good friend Djokovic was always going to be an almighty task.

The Serb, who entered the match having won 45 of 46 matches this year, described the battle as a game of cat and mouse.

“He is such an unpredictable player,” the Serb said of Tomic.

“He didn’t have anything to lose. He was hitting a lot of winners today. It was very hard to predict where he was going to go. He was not playing a lot of unforced errors.

“We were playing cat and mouse I think, but I’m just happy to get through.”

The contest had been billed as the most significant for Australian men’s tennis since Lleyton Hewitt’s 2005 Australian Open final against Marat Safin.

The big Russian triumphed that night and since then Hewitt has been in steady decline with the likes of Roger Federer, Rafael Nadal and Djokovic the alpha males of the tennis world.

In a sign of the skyrocketing interest in Tomic, hundreds of fans watched him hit up this morning with one Australian television journalist orchestrating a Tomic chant out of The Fanatics.

The youngster waved in appreciation to members of the supporters’ group that have for so long put all their faith behind Hewitt.

Tomic’s box reunited 2001 Wimbledon finalists Goran Ivanisevic and Pat Rafter, the colourful Croatian is firm friends with the Tomics while Davis Cup captain Rafter has provided support throughout the tournament.

Having not dropped serve for eight sets, the youngster started nervously in the opening game and had his serve broken.

Unlike Tomic’s previous opponents, Djokovic showed patience and moved the gangly teenager out of his comfort zone.

The Gold Coast teenager committed more unforced errors in the first set than his entire fourth round clash as Djokovic captured a one-set lead after 34 minutes.

The Serbian provided Tomic with an opening with a terrible fourth game in the second set, gifting him a service break with two unforced errors and two double faults.

The Australian grew in confidence with even a smile slipping out from his father John Tomic on his way to snatching the second set with a curling forehand down the line.

Tomic broke Djokovic again and held a 3-1 lead before the Australian’s radar went haywire, the occasion possibly getting the better of him.

The Serbian pounced, peeling off the next seven games in a row to take control of the match.

The world No.158 rallied but at 5-5, Tomic wobbled a little on serve and Djokovic screamed in celebration after claiming the telling break with a delightful drop shot.

The tennis court is no place for young men these days, the average age of a player cracking the top 100 is nearly 26.

But even in defeat, Tomic showed he is anything but average.