Tomic wipes Malisse off the court

Bernard Tomic has become the youngest men's player to reach the Wimbledon quarterfinals in a generation following his demolition of Belgian Xavier Malisse. 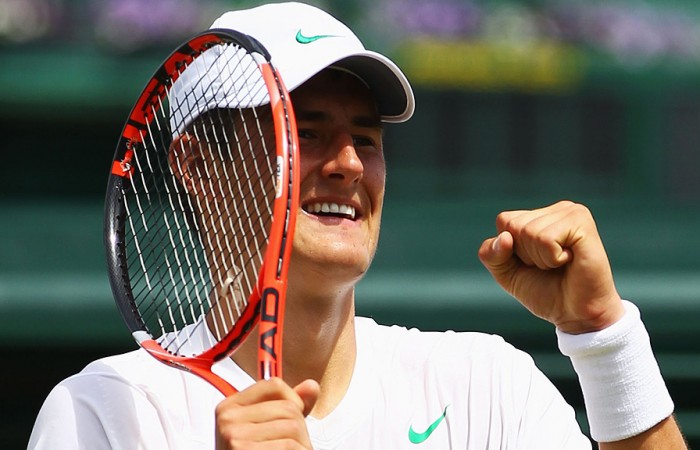 Bernard Tomic has become the youngest men’s player to reach the Wimbledon quarter-finals in a generation following his demolition of Belgian Xavier Malisse.

The last time there was a younger male in the tournament’s final eight was way back in 1986, a then 18-year-old Boris Becker storming his way to a second straight title that year.

Tomic wiped Malisse off the court on a hot day in London 6-1 7-5 6-4 victory over Belgian Xavier in only an hour and 21 minutes.

The Queenslander will play two-time Australian Open champion and good friend Novak Djokovic in the quarterfinals following the Serb’s 6-3 6-3 6-3 win over Michael Llodra.

Tomic produced some breath-taking tennis on the back of another superb serving performance and the European was regularly showing his frustration throughout the match.

Tomic is only the fifth qualifier to reach the quarterfinals at Wimbledon during the Open era.

The 18-year-old made just eight unforced errors for the match and his ranking is set to lift to around 72 following the win.

In baking heat by British standards, all the public seats at court 18 had been filled more than an hour before the match.

The showcourt has a capacity of just under 800 but there were plenty more catching a peek from any vantage point possible.

There were some leaning over fences, some looking through cracks in the fence while the rooftop of the broadcast centre proved very popular.

And with all due respect to 2002 Wimbledon semi-finalist Malisse, not many had come to watch him.

In nearly identical style to his win over Robin Soderling, Tomic raced through the first set this time winning it in 21 minutes.

Unseeded Malisse spent a large chunk of the first set complaining about line calls and the incorrect tension being set on his racquets.

“Maybe the stringer is Australian,” the Belgian said in jest to the chair umpire at one point.

There was almost a hush at times in the first set as Tomic marched through the games before Malisse showed a bit more resistance in the second set.

Still the European wobbled a bit on serve in the tenth game and Tomic pounced to grab the break and claim a two-set lead just over the hour mark.

Malisse was furious with dropping the second set, belting his racquet against his foot four times and bending it out of shape.

Tomic grabbed an early break for a 2-0 lead in the third set before dropping his first service game.

Malisse had some of his racquets re-strung during the match but by the time they arrived in the third set and Tomic was on a roll.

The sight of members of The Fanatics supporters’ group throwing their weight and voice behind Tomic was another sign of the changing times in Australian tennis.

They have long been devoted to Lleyton Hewitt’s cause but have had to accept that Tomic is the man for the moment and the next decade.

Tomic is the youngest quarter-finalist since Germany’s Boris Becker, who collected his second straight crown at the All England Club in 1986.