Bernard Tomic will take the mantra that anything is possible into his Wimbledon quarter-final against world No.2 Novak Djokovic. 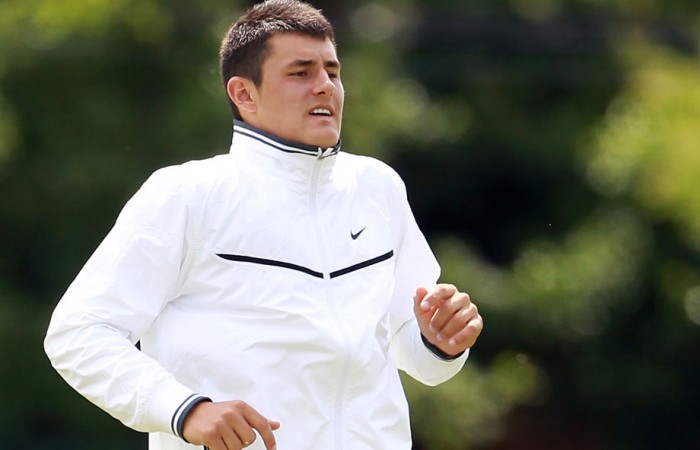 Bernard Tomic will take the mantra that anything is possible into his Wimbledon quarter-final against world No.2 Novak Djokovic.

Having made the tennis world sit up and take notice, 18-year-old Tomic is far from overawed but acutely aware of the mammoth task he faces against a foe who has also become a friend.

And notably Tomic is seeking to better another feat of Hewitt, who was aged 19 when he reached his first grand slam semi-final at the 2000 US Open.

Tomic is attempting to become only the second qualifier to reach the Wimbledon semis since a noisy American named John McEnroe back in 1977.

The assignment could not be more daunting against the hottest player in the world, who has lost only one of his 46 matches in 2011, and that to Roger Federer.

Adding to the difficulty, Djokovic probably knows Tomic’s unusually varied game as well as any player on tour, having hit up with him more than a dozen times in the past 18 months.

Tomic has had to beat some fine players in the past week and a half, most notably world No.5 Robin Soderling.

But the world No.158’s game is unlikely to trip up Djokovic in the same way it has Nikolay Davydenko, Igor Andreev, Soderling and Xavier Malisse.

The Gold Coast teenager has produced some breathtaking tennis at Wimbledon on the back of his near unbreakable serve.

But Djokovic is one of the best returners in the business and expected to really test out the tall teenager in that department.

“It’s tough, because even in practice when I play against Novak, I can’t execute my shots because he’s got one of the best returns in the world,” Tomic said.

“If I can execute my shots and he doesn’t return as good on that day, which could be impossible, because his return is unbelievable, then maybe I’ll have a chance.

“We’ll know from the first returns he hits.”

Tomic and Djokovic have been firm friends since Tomic beat the Serb in an exhibition match in Melbourne in January last year and Djokovic is an admirer of the young Australian’s talent.

“I’ve hit with him a lot of times. He’s a cool guy,” said Tomic. “One of the nicest guys out there on the tour.

“I think he has a respect for me.

“I’ve got a much bigger respect for him because he’s played at that big level over the last five years and consistently held being three in the world, now even a step closer to becoming No.1.

“I did hit with him before the tournament, we played a set.

“Things are not looking good for me, but hopefully he destroyed me then and not on Wednesday.”

Djokovic made it clear the admiration was mutual.

“He has an incredible talent and incredible potential and he is showing it now,” said Djokovic.

Tomic has already defied the modern day order by even reaching the last eight, as the last time a younger player made the Wimbledon quarter-finals was Boris Becker back in 1986.

The game has changed enormously since then with racquet technology and improved fitness programs credited with lifting the the average age for men’s players cracking the top 100 to near 26.

Tomic has a history of lifting for the big occasion but a question about the possibility of actually going on to win Wimbledon seemed to almost blindside him for once on Monday.

His eyes opened up in surprise and a goofy smile crept across his face.

“Three matches away,” he said. “Wow, that’s a big question.

“Well, anything is possible.”