It was another great day on the grass for Australia’s juniors with wins for three out of four Aussies. 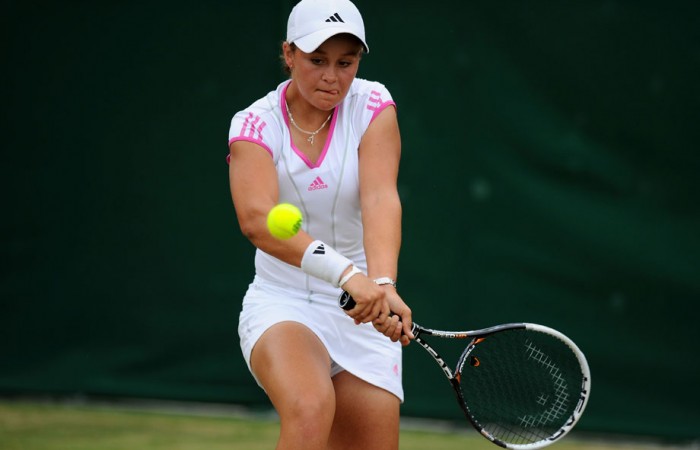 It was another great day on the grass for Australia’s juniors with wins for four out of five Aussies.

Twelfth-seeded 15-year-old Ash Barty kicked off her first junior Wimbledon campaign with a straight sets 6-3 6-4 win over local Lucy Brown. The Queenslander won 91 per cent of her first serves and struck 24 winners to overpower her 18-year-old opponent in under an hour.

Barty will play unseeded German Katharina Lehnert in the second round on Wednesday (fourth match on Court 8).

Ninth-seeded Australian Andrew Whittington knocked off another Brit, Luke Bambridge. Whittington kept his cool in a tight first set to progress 7-6(4) 6-3 in 68 minutes. Despite spraying nine double faults and hitting more unforced errors than his opponent (16 to 12), Whittington came out on top with 25 winners helping him into the second round where he will play Germany’s Robin Kern.

Ben Wagland added his name to the winners’ list in a tough three-setter against American Shane Vinsant. Wagland triumphed 6-3 4-6 8-6 in 94 minutes. The Australian blasted 40 winners and converted three of his four break-point chances to move into the second round.

In other Wimbledon matches, Ashley Fisher and Stephen Huss upset ninth seeds Eric Butorac and Jean-Julien Rojer in the men’s doubles, Carsten Ball knocked out his former doubles partner Chris Guccione in the second round of the men’s doubles, Sam Stosur and Sabine Lisicki accounted for No.1 pair Vania King and Yaroslava Shvedova, while sixth seeds Anastasia Rodionova and Nadia Petrova (RUS) ousted Ana Ivanovic and Andrea Petkovic in the women’s doubles.

Wimbledon 2011 Day 8
Tuesday June 28
Televised matches on 7TWO and Channel 7 will include: