Both Williams sisters and top seed Caroline Wozniacki were all sent crashing out of Wimbledon on Monday as the women's singles was rocked by a triple upset. 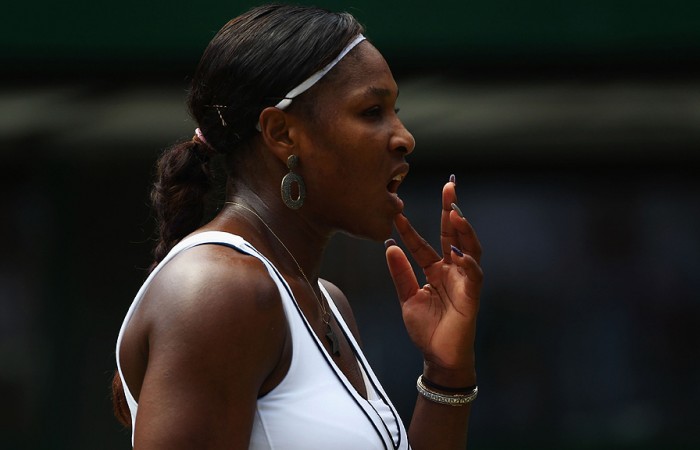 Defending champion Serena Williams, five-time champion Venus Williams and top seed Caroline Wozniacki were sent crashing out of Wimbledon Monday as the women’s singles was rocked by a triple upset.

Serena, who has only recently returned from a year-long layoff caused by injury and life-threatening health problems, was stunned 6-3 7-6(6) by fiery Frenchwoman Marion Bartoli in a pulsating battle on Court One.

And Danish world number one Wozniacki meanwhile will have to wait a while longer for her maiden Grand Slam triumph as she was beaten 1-6 7-6(5) 7-5 by 24th seeded Slovakian Dominika Cibulkova.

Although clearly not at her best, Serena showed trademark resilience in the second set as she saved four match points before Bartoli eventually held her nerve to wrap up victory in 1hr 57 mins.

“Beating Serena here is like a dream come true,” added Bartoli, a losing finalist here in 2007.

“She’s been out for a year but she is still one of the greatest champions in the history of women’s tennis. It was not easy mentally to hang on after she managed to save the match points but I did so I’m very happy.”

“Of course, it’s a great performance. But tomorrow is another day so I have to stay extremely focused and not think too far ahead.”

Four-time champion Serena was left to reflect on her first failure to reach the Wimbledon quarter-finals since her third round exit in 2005.

“I never came here thinking I would lose. That’s my attitude. You know, you win some and you lose some. Today just happened to be the one that slipped under me,” Serena said.

Bartoli’s reward is a quarterfinal against big-serving German wildcard Sabine Lisicki, who advanced to the last eight with a 7-6(3) 6-1 dismissal of Petra Cetkovska of the Czech Republic.

Lisicki, who accounted for French Open champion Li Na in the second round, again served formidably, booming down eight aces with her fastest serve weighing in at a blistering 123 miles per hour.

Lisicki is now on course for a possible semifinal showdown with Russian fifth seed Maria Sharapova, who advanced to the quarterfinals after overcoming China’s Peng Shuai 6-4 6-2.

The first set was a closely-fought affair with little between Sharapova and the Chinese number two, but the 2004 Wimbledon champion was able to impose herself much more in the second set against the 20th seed.

“It’s great,” Sharapova said after wrapping up victory in an hour and 21 minutes. “I’m giving myself an opportunity to go even further so I’m quite happy about that.

“I have to be realistic about the fact that I hadn’t gotten past the fourth round in a few years so this a step forward and it’s just about taking care of business in the next round.”

In other side of the draw, Austrian world number 80 Tamira Paszek advanced to the quarterfinals of a Grand Slam for the first time when she battled past Ksenia Pervak of Russia, 6-2 2-6 6-3.