Bernard Tomic has the chance to set up a dream Wimbledon quarterfinal showdown against world No.2 and occasional hitting partner Novak Djokovic on Monday. 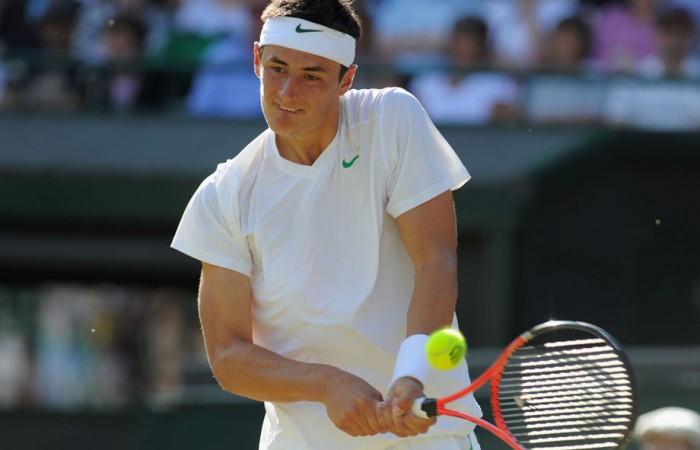 Bernard Tomic has the chance to set up a dream Wimbledon quarterfinal showdown against world No.2 and occasional hitting partner Novak Djokovic on Monday.

The 18-year-old must first dispose of Belgian world No.42 Xavier Malisse in a round of 16 clash starting at midday (2100 AEST) at the All England Club.

Meanwhile second seed Djokovic takes on Frenchman Michael Llodra for a spot in the final eight on a busy day at the famed south-west London venue.

Tomic won’t be able to catch Malisse by surprise with the Belgian having played him at Queen’s last year and kept an eye on him at the famed Nick Bollettieri Tennis Academy in Florida.

The youngest player in the Wimbledon main draw has benefited in the opening three rounds by catching his older opponents on the hop as they struggled to adapt to his unusual style of play.

“Having played him last year, I know his game,” Tomic said of his three-set loss at the Wimbledon warm-up event last year.

“We both play a bit similar.

“I think whoever becomes a little bit more aggressive at times is going to win that match.”

Tomic has kept a cool head in his surprise run to the second week, the only real signs of the Gold Coast teenager tightening in his win over fifth seed Robin Soderling was serving for the match.

“I think I’ve got nothing to lose,” Tomic said.

“I’ve got to play relaxed, have fun.

“That’s when I play my best tennis.

“I think I can play really well when I do that.”

Malisse, 30, reached the semifinals in 2002 at the All England Club but Monday’s match will be his first appearance in a round of 16 encounter since 2004.

The European felt that Tomic tended not to be distracted by his surroundings but added the second week at a grand slam was an altogether different set of circumstances.

“I’ve seen him a little bit at the academy we practice at,” Malisse said.

“He’s a nice kid who just doesn’t fear too much.

“He just goes out and plays.

“I think that’s a strength in one way, because you just play your game and you don’t really think about your surroundings.

“It does get to a second week, so maybe it changes a little bit.”