Gajdosova knocked out by Wozniacki

Australia's Jarmila Gajdosova has been outclassed by world No.1 Caroline Wozniacki 6-3 6-2 in their third round encounter on centre court at Wimbledon. 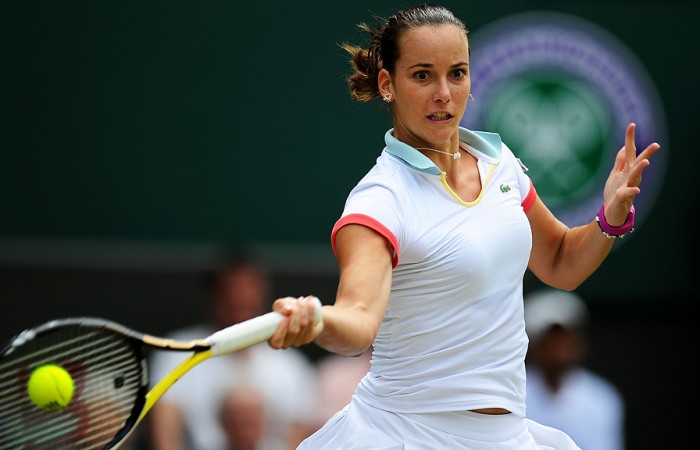 Australia’s Jarmila Gajdosova has been outclassed by world No.1 Caroline Wozniacki 6-3 6-2 in their third round encounter on centre court at Wimbledon.

Gajdosova’s defeat in 66 minutes ended the campaign of Australia’s women in the singles at the All England Club for the year.

Gajdosova’s camp had thought that she was on the verge of a breakthrough win but the former Slovakian was just not able to seize the moment against the Dane.

Wozniacki produced a truly polished performance, landing 70 per cent of her first serves and her number of unforced errors being able to be counted on one hand.

If playing on Wimbledon centre court was not daunting enough, Gajdosova’s match was played in front of a galaxy of sporting superstars in the royal box.

Wozniacki has had to relentlessly fend off questions regarding the legitimacy of her world No.1 ranking because of the absence of a grand slam.

The Dane has never progressed beyond the fourth round at SW19 but she does have an uncanny instinct for the sport.

She pounced on an errant service game from Gajdosova to grab a break for a 5-3 lead in the first set.

The Australian had Wozniacki at 30-30 in the next game but the Dane produced an inch-perfect lob and then claimed the set on the very next point.

Gajdosova dropped her serve early in the second set and despite having a look at a break point in the next game, the Dane was able to hold.

Gajdosova was broken again as Wozniacki comfortably reached the fourth round.

“I thought I played pretty well, I had my chances, I thought it was a pretty good match,” Gajdosova said.

“I actually walked off feeling quite satisfied with the performance, I did a lot of things right.

“She makes like one unforced error a match but that is what she does in every single match.

“She played well when she had to and she was very solid.”