Tomic sets up clash with Soderling

Bernard Tomic has pulled off a stunning come from behind victory against Russian Igor Andreev to maintain Australia's men's presence at Wimbledon. 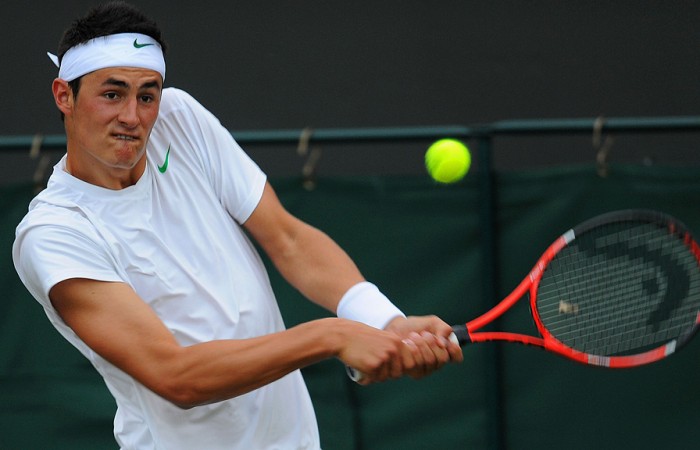 Bernard Tomic has pulled off a come from behind victory against Russian Igor Andreev to maintain Australia’s men’s presence at Wimbledon.

Tomic’s victory in the rain-affected match sets up a third round showdown with Swedish fifth seed Robin Soderling this weekend.

With Lleyton Hewitt, Davis Cup captain Pat Rafter and Davis Cup coach Tony Roche watching on under grey skies, the 18-year-old pulled off the win in just under three hours.

Tomic’s victory stopped an unwanted slice of tennis history from occurring as Australia has had a men’s presence in the Wimbledon third round every year since the start of the Open era in 1968.

Tomic raised his left fist in celebration after achieving the victory and waved his racquet to the crowd.

He said he would talk to Hewitt about how to blunt Soderling’s power game after the big-hitting Scandinavian overcame the 2002 champion in five sets on Thursday.

“I will talk to him and a few more people, I am looking forward to playing him … he has been in the top ten for a while,” Tomic said.

“I have to go out there and have some fun.”

World No.158 Tomic said he was delighted with the result.

“It is a big thing, it is really big to have the chance to qualify,” he said.

“I was happy just to have qualified.”

It is the third grand slam in a row that Tomic has been Australia’s last men’s player in the draw.

Matosevic was the first to fall, hitting 83 unforced errors on his way to a four-set loss to Argentine Juan Ignacio Chela while Hewitt succumbed to Soderling under the centre court roof.

Trailing two sets to one entering the day, Tomic could not afford an early slip up and he pounced by breaking Andreev in the ninth game.

He then stepped up the pressure and easily put away the 27-year-old Andreev in the final set.