Time for Gajdosova to strike: coach

It is time for Jarmila Gajdosova to take down a big name at a grand slam - starting with world No.1 Caroline Wozniacki. 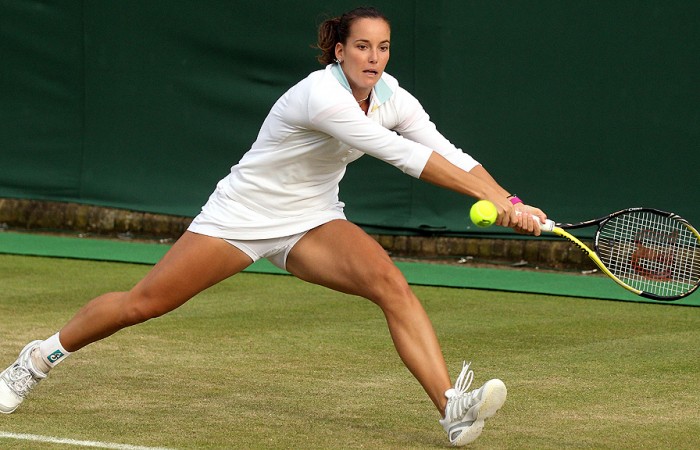 It is time for Jarmila Gajdosova to take down a big name at a grand slam – starting with world No.1 Caroline Wozniacki.

That is the opinion of Gajdosova’s coach Gavin Hopper before the Australian’s tantalising third round encounter with the Danish top seed at Wimbledon on Saturday.

Hopper thought the former Slovakian was on the cusp of a career-defining result following her smooth progression at the All England Club this week.

“This year, it’s time for her to take someone out, she’s got to do it,” he said.

“[If] it’s the number one player in the world … it’s not a bad call for Jarks [Gajdosova] at the moment.

“I still believe this surface suits her.

“Her serve is one of the better serves in women’s tennis, her movement’s very good and her ball-striking ability is as good as anyone in the game.”

Wozniacki, 20, has won both of her previous meetings with Gajdosova but their last meeting was three years ago.

The legitimacy of Wozniacki’s status as the top player in the world will remain in question until she captures a maiden grand slam title.

And the Dane has never progressed beyond the fourth round at SW19.

Gajdosova has been threatening to make inroads at a major for the past 12 months but not managed to take that next step.

The 24-year-old reached the fourth round at SW19 last year and pushed five-time champion Venus Williams in a tight two-set match.

Hopper has been particularly encouraged by Gajdosova’s ability to recover from early trouble in her opening matches against Alona Bondarenko and Andrea Hlavackova.

“She came into Wimbledon still concerned she’s not a grass court player but in the last couple of days I’ve tried to rub that out of her mind,” he said.

“I’ve come here with a feeling, at some stage it’s going to be her time.

“What’s been impressive in her first two matches here is that both matches she’s been under pressure … and she has got through those matches.

“From 5-2 down [against Hlavackova], she was mentally as good as I’ve seen her. Her focus was phenomenal.

“If she can play that sort of tennis, she’s going to be tough to beat.”