Lleyton Hewitt stretched Swedish fifth seed Robin Soderling to the limit before succumbing in an epic five-set match under the centre court roof at Wimbledon. 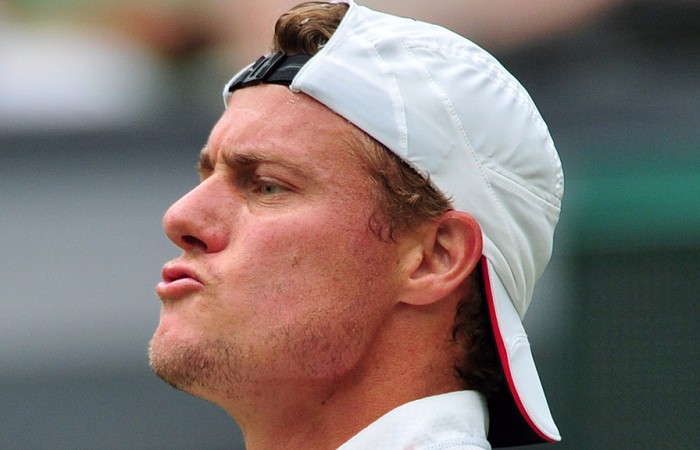 Lleyton Hewitt stretched Swedish fifth seed Robin Soderling to the limit before succumbing in an epic five-set match under the centre court roof at Wimbledon.

Hewitt produced some of his finest tennis in years but was unable to stop the two-time French Open finalist from winning their classic second-round encounter 6-7(5) 3-6 7-5 6-4 6-4.

His fighting performance suggested he may not be quite ready for retirement even though he was unable to pull off a massive upset with his foot injury.

Hewitt used all of his guile and athleticism to neutralise Soderling’s power game in humid conditions for large chunks of the contest that lasted just under four hours.

But the Swede’s ability to change tactics in the final two sets proved critical as Hewitt’s serve faded the longer the match wore on.

The day started out just as Hewitt would have wished.

Two hours before the match, he hit up on court 15 under largely blue skies in front of the Fanatics singing renditions of “Only one Lleyton Hewitt”.

It was only last week that he was unable to complete a match in a lead-up tournament in Eastbourne because of the stabbing pain in his foot.

However he used all of his street smarts on serve and made precious few mistakes to force a tiebreak in the first set.

He forced his way to a set point at 6-5 and Soderling cracked, his long backhand handing the Australian the opening set.

Hewitt started piling on pressure on the Soderling serve but needed to pull off some acrobatics to finally break the Scandinavian.

On his third break point and with Soderling having the simplest of shots at the net, Hewitt charged to his left and somehow flicked a diving backhand back into court.

Having captured the second set, Hewitt showed his athleticism again by producing a spectacular diving volley reminiscent of three-time champion Boris Becker in his pomp.

Soderling started to mix up his game in the third set and this time Hewitt wavered a little late in the set and the big Swede pushed the match into a fourth set.

Soderling lost his bearings momentarily at the start of the next set by walking to the wrong end but his tactics started to work.

At 5-4 up, the Swede deliberately repeatedly bunted the ball softly back to Hewitt and the Australian faltered trying to generate his own power.

Just when it looked like the match was slipping away from the former world No.1, he came to life again and had a little bit of luck.

A shot of the Australian’s struck the tape and just fell over the net to set up the telling break point.

Soderling reacted by instantly breaking back against a passive Hewitt service game.

And once again at 5-4 down, Hewitt made some telling mistakes to allow Soderling to break and seal the win.

Soderling dropped to his knees to celebrate his great escape.

He will meet the winner of the match between Bernard Tomic and Russian Igor Andreev, which was postponed due to bad light with the Russian leading 6-4 7-5 3-6 on Thursday.