Bernard Tomic and Lleyton Hewitt have both won through to the second round of Wimbledon while Sam Stosur suffered an early loss on Tuesday. 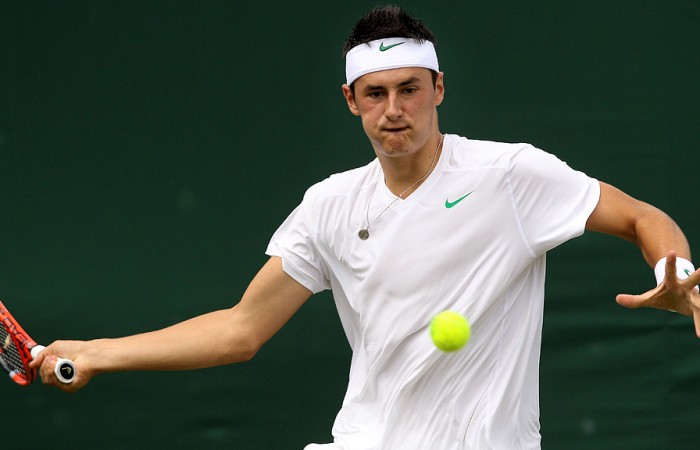 Aging champion Lleyton Hewitt and great hope Bernard Tomic advanced to the second round at Wimbledon on Tuesday as Samantha Stosur continued her poor run at the grasscourt grand slam.

A week after retiring mid-match because of a stabbing pain in his left foot, Hewitt defeated Kei Nishikori 6-1 7-6(4) 6-7(7) 6-3 late on day two to join Tomic in the second round.

The youngest player in the men’s draw comfortably accounted for former world No.3 Nikolay Davydenko 7-5 6-3 7-5, while Stosur’s Wimbledon woes continued in a 6-3 6-4 loss to world No.262 Melinda Czink.

There had been major questions about whether Hewitt would be able to last an entire match against the fleet-flooted Japanese youngster with his injured foot.

The 2002 champion regarded his preparation as the toughest of his career leading into a grand slam before defeating Nishikori in three hours and seven minutes.

He sunk to his knees to celebrate the win in front of his supporters with shadows falling across court 12.

Hungarian Czink earlier made a mockery of her lowly ranking with an impressive performance and claimed victory in an hour and seven minutes against Stosur.

The former world No.37 made a bright start and despite tenth seed Stosur rallying from 4-0 down in the second set, the outsider was too good.

The result added to Stosur’s ordinary record at Wimbledon as she exited the tournament at the first stage for the second straight year.

In her nine trips to SW19, she has only made the third round on one occasion.

There had been hopes that Stosur was ready to make inroads at SW19 following last week’s win over 2010 Wimbledon finalist Vera Zvonareva at the lead-up event in Eastbourne.

But it was not to be.

Tomic progressed to the second round at Wimbledon for the first time in convincing fashion.

The youngest player in the men’s draw was in total command throughout, lobbing Davydenko to win the match in under two hours.

Following last month’s opening round loss at the French Open, the 18-year-old has played himself into form by playing lead-up events in Nottingham and negotiating his way through qualifying.

Davydenko, the 29th seed, has not been the same player since a wrist injury early last year and Tomic outclassed the 30-year-old on the back of a strong serving performance

Jarmila Gajdosova and Anastasia Rodionova’s opening round matches have been pushed back to Wednesday.