Nadal beats the rain and Russell

Defending champion Rafael Nadal cruised into the second round of Wimbledon before the rain hit on on Monday as Andy Murray went under cover to launch his bid to end Britain's 75-year wait for a men's winner. 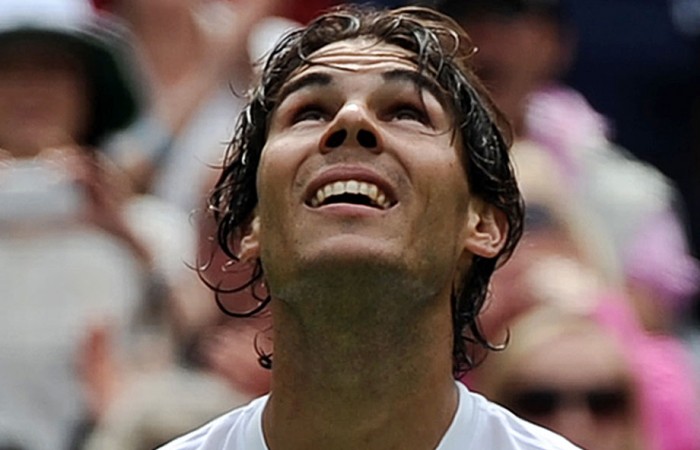 Defending champion Rafael Nadal cruised into the second round of Wimbledon before the rain hit on on Monday as Andy Murray went under cover to launch his bid to end Britain’s 75-year wait for a men’s winner.

Nadal, fresh from a record-equalling sixth French Open and 10th major in total, saw off 33-year-old American Michael Russell 6-4 6-2 6-2 win as the Spaniard opened proceedings on Centre Court on the first day of the 125th Championships.

The top seed, who unleashed 35 winners, set up a second-round meeting with American Ryan Sweeting who came from two sets down to beat Spain’s Pablo Andjuar.

Nadal’s win also extended his record of having never lost a first-round match at a Grand Slam event with the 25-year-old now standing at 29-0 in his career.

But despite a bright start to the day, heavy rain eventually curtailed the day’s opening round with 13 of the scheduled 32 men’s singles matches having to be held over until Tuesday.

The miserable conditions meant that Wimbledon’s roof was called into action to at least ensure that fourth seed Murray, a semifinalist for the past two years, was able to play Spain’s Daniel Gimeno-Traver.

The home favourite survived 4-6 6-3 6-0 6-0 to set up a clash with either Slovenia’s Blaz Kavcic or Germany’s Tobias Kamke in the second round.

Nadal said he was delighted to be able to return to Wimbledon to defend his title, something that was denied him in 2009 because of a knee injury.

“It’s a very, very big emotion to come back to this beautiful court. Everything was perfect,” he said.

But Nadal refused to look too far ahead in the tournament and possible showdowns with Roger Federer, Novak Djokovic and Andy Murray.

Nadal has constantly refused to entertain the prospect of chasing down Federer’s 16 Grand Slam titles, a show of modesty that sparked an astonishing outburst from former Wimbledon champion John McEnroe.

“I’m getting a little bit tired of him continuing to downplay his chances,” McEnroe told the BBC.

“There is definitely an argument for him not only being the best player at the moment, but the greatest of all time.

“Rafa has won things like the Davis Cup and an Olympic gold medal [in singles] that Roger Federer hasn’t, and he is right on his tail in terms of Grand Slam titles too – so why can’t he just say ‘Look, I’m the best’.”

Elsewhere, Czech sixth seed Tomas Berdych – beaten by Nadal in last year’s final – stormed through to the second round with a 6-2 6-2 6-1 win over Italy’s Filippo Volandri.

Monfils dedicated his win to close friend and former physio Philippe Manicom who is battling cancer.

“I did the job without playing a great match because I had too much to think about,” said Monfils.

“My former physio Philippe Manicom has cancer. I was one of the last people he spoke to before he was put in a coma as he was suffering so much. It’s not easy for me.”

Raonic is a potential third-round opponent of Nadal.

“Even though people are saying I’m playing with nothing to lose, I care a lot about it,” he said.

“I’m not going to go lose and just accept it and say, ‘I’ve done well this year. It’s fine’. I’m not that kind of person. I expect a lot from myself. I want to achieve a lot and I don’t want to put any limits on myself.”