Dokic edged out, Matosevic on the ropes

Jelena Dokic lost an enthralling three-set match against sixth seed Francesca Schiavone in the opening round of Wimbledon on Monday. 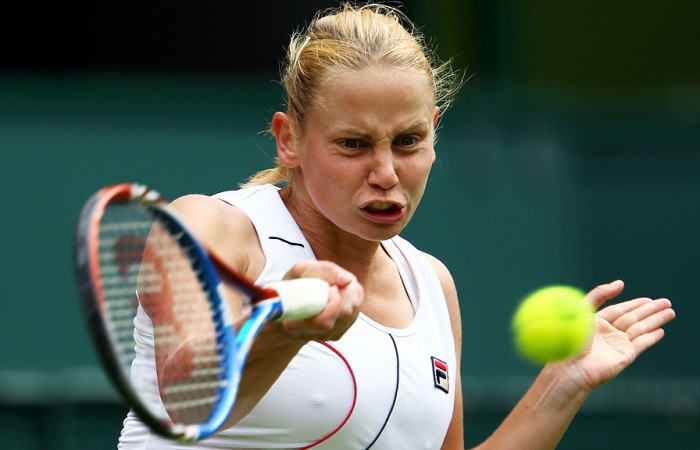 The crafty Italian clawed her way to a 6-4 1-6 6-3 first-round victory in just over two hours with the match completed under the centre court roof following afternoon showers.

Dokic put up a heck of a fight considering her restricted movement with her left thigh heavily strapped, using heavy ground strokes to move Schiavone around.

However last year’s French Open champion and this year’s Roland Garros runner-up captured the key moments in the match.

Dokic entered the encounter brimming with confidence after reaching the final of a lead-up tournament in the Netherlands on Saturday.

The Australian had also won her three previous matches against Schiavone and was well aware that grass is not the Italian’s strongest surface.

Dokic looked stronger than Schiavone early on but was unable to take her chances in the first set as the feisty European claimed it 6-4.

Dropping the set seemed to steel Dokic and she finally claimed a break point at her seventh attempt by rifling a backhand across the approaching Schiavone.

The Australian pummelled her opponent in the second set, only a rolled ankle momentarily slowing her progress in taking the second set.

Rain halted play with the scores locked at 1-1 in the deciding set with Dokic holding the momentum.

Following the closing of the roof and a 50-minute break, including their warm-up, a refreshed Schiavone was more positive and snatched a break.

Dokic broke back immediately but, at 4-3 down, the Australian double faulted to hand Schiavone the chance to serve for the match.

The Australian pressed, having three break points, but the Italian kept her head to finish off the job.

Schiavone faces either Barbora Zahlavova Strycova of the Czech Republic or Canadian qualifier Aleksandra Wozniak in the second round.

Their match did not get underway due to the rain that forced 31 of the 64 scheduled matches to be carried over to Tuesday.
The other Australian in action, Marinko Matosevic, was trailing 6-4 6-4 6-7 (6-8) 3-1 against Argentine 25th seed Juan Ignacio Chela.

Dokic thought the break for the weather had been a turning point in her match.

“I did lose some momentum,” she said.

“She did a couple things differently that she didn’t do up until that point.”

Dokic said she was disappointed at her second opening-round exit in a row at a Grand Slam, considering her good form at other tournaments this year.

“It will hurt for a couple days,” she said.

“I’ll be thinking about, you know, what I could have done differently.

“I was just unlucky today.

“She came up with a few great shots when she really, really needed to, that usually maybe she wouldn’t have.

“For me it was the other way around.