The trio of Samantha Stosur, Jarmila Gajdosova and Jelena Dokic are set to carry Australia's hopes at Wimbledon, starting on Monday. 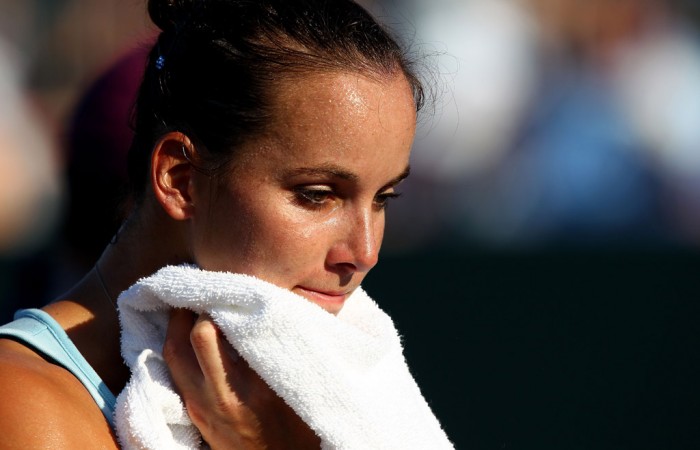 The trio of Samantha Stosur, Jarmila Gajdosova and Jelena Dokic are set to carry Australia’s hopes at Wimbledon, starting on Monday.

Stosur and Dokic have both been enjoyed strong lead-ups, while Gajdosova has shown signs she is ready to cause some damage at a grand slam.

Australia is set to boast three women in the world’s top 50 on Monday.

Teenager Bernard Tomic and Marinko Matosevic bolstered the men’s ranks on the weekend by forcing their way through qualifying to join the ailing Lleyton Hewitt.

But the sight of any of them reaching the third round would be cause for minor celebration.

Not that the women are exactly shouting out their prospects at SW19 from the rooftops.

Still feeling a little burnt from last month’s shock third-round exit at the French Open to Gisela Dulko, Stosur was far from worried about a possible fourth round match-up with her nemesis Maria Sharapova.

She just wanted to get there first before worrying about the Russian, who held an 8-0 record against her.

“I don’t want to look ahead in any tournament, let alone Wimbledon,” Stosur said.

“I have made the third round one time (in eight trips).

“I think for me it is important to just get through as many matches as possible.”

Stosur is set to meet unheralded Hungarian Melinda Czink in the opening round.

“It proved that even not on my best surface that I have improved enough to compete with the best on it,” she said.

Dokic has a formidable opponent first up in 2009 French Open champion Francesca Schiavone.

Not that Dokic lacks for confidence, having reached the final of the lead-up event in the Netherlands.

Her ranking is set to move into the 40s on Monday, the highest for seven years.

“On grass, it is not such an extremely tough draw,” she said, having defeated Schiavone in all of their three meetings.

“I played a similar player to her this week and beat her.”

The men have all been set testing assignments.

Lleyton Hewitt will try to carry his troublesome foot through an opening round match against fleet-footed Japanese youngster Kei Nishikori.

Tomic has a date with former world No.3 Nikolay Davydenko, while Marinko Matosevic will make his Wimbledon debut against feisty Argentine and 25th seed Juan Ignacio Chela.

The other Australian in the singles, Anastasia Rodionova, plays Andrea Hlavackova for a possible second-round clash with Gajdosova.