Sam Stosur's impressive run at the AEGON International at Eastbourne has come to an end, falling to Frenchwoman Marion Bartoli 6-3 6-1 in Saturday's semifinal. 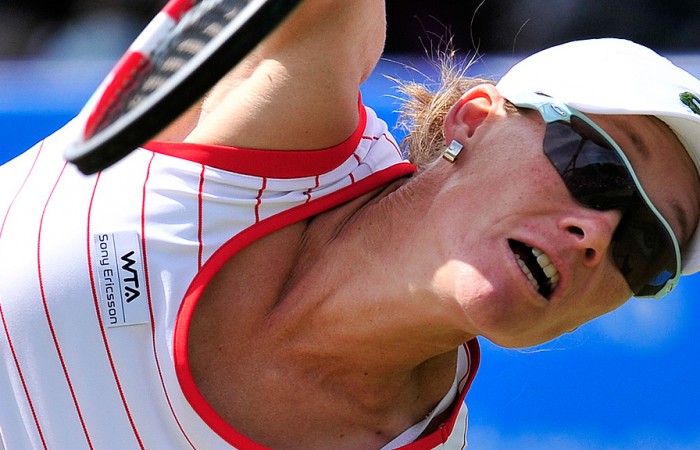 Sam Stosur’s impressive run at the AEGON International at  Eastbourne has come to an end, falling to Frenchwoman Marion Bartoli 6-3 6-1 in Saturday’s semifinal.

After the match was postponed due to a washout on Friday, Bartoli quickly settled in the first set and comfortably handled the blustery conditions.

The Frenchwoman scored an early break and raced to a 3-0 lead in the first set before Stosur held serve to get on the board.

The Australian, who came from behind to beat Vera Zvonareva in an enthralling three-set quarterfinal, tried valiantly to work her way into the match but Bartoli responded to every challenge and closed it out in 70 minutes.

Stosur will now travel to Wimbledon to prepare for her first round match against Hungarian Melinda Czink on Tuesday.

“It’s been a really good week for me in spite of this match,” Stosur said.

“It’s been pretty much been exactly what I would want going into Wimbledon.

“I thought the other day when I played Vera it was the worst I’d ever played in, but I think today was even worse than that.

“It definitely wasn’t easy at all. It’s one of those days where you’ve just got to try hard and do whatever you can to get through because it’s very hard to try and hit the shots that you want.”

Stosur has never progressed beyond the third round at the famed south-west London tournament from eight visits.