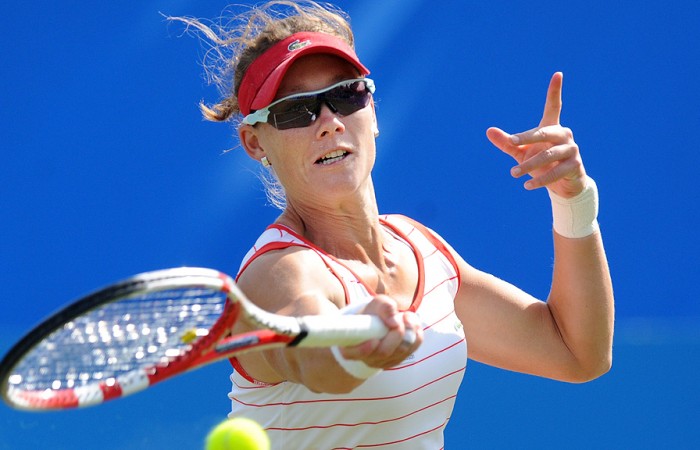 Samantha Stosur staged a comeback on Thursday to defeat Wimbledon finalist Vera Zvonareva 4-6 7-6(4) 6-4 in a key lead-up event to the third grand slam of the year.

It may be her weakest surface but the Australian showed true grit to rally from a set and 4-2 down in the second-set tiebreak to conquer the world No.3.

Taylor said the 2010 French Open finalist had made a much better fist of the short transition time from clay to grass ahead of Wimbledon this year.

“Her attitude has not always been as good as it should be but this week her attitude has been good from the first point of the tournament,” said Taylor.

With Zvonareva three points away from a straight-sets win, Stosur reeled off five successive points on the way to victory in tricky conditions at Devonshire Park.

The result booked Stosur her third semifinal berth at the Eastbourne tournament – against 2007 Wimbledon finalist Marion Bartoli – and Taylor was encouraged by her resilience before Wimbledon.

“The most significant thing was that she was mentally very, very good against last year’s Wimbledon finalist,” he said.

“Vera just beat Serena [Williams] the day before and a girl like Vera is known to be mentally tough and Sam was mentally tougher today.”

He said Stosur had been a bit anxious on grass in the past but was maturing as a player.

The 27-year-old has taken her time to hit her straps at grand slams, attending five French Opens before making a run to the semifinals in 2009.

Similarly at the US Open, the Queenslander had made minimal impact in six visits before reaching the quarterfinals last year and bowing out in three sets to eventual champion Kim Clijsters.

Stosur has appeared this week to have shaken off the disappointment from her shock third-round exit at Roland Garros last month.

She felt she had proved to herself that she could cut it on grass despite only reaching the third round at Wimbledon once from eight attempts.

“I actually have not done too bad here [in Eastbourne], I have made semis here and bombed at Wimbledon so I don’t know what to make of that,” she said this week.

“Hopefully this will be the year to turn that around.

“I think I can play well and I am playing well on this surface.

“If you can make semis here, I would like to back myself to go better there [than in the past].”

Stosur will play Bartoli in Friday’s semifinals while Daniela Hantuchova takes on Petra Kvitova for the other spot in Saturday’s final.