Samantha Stosur will begin her Wimbledon campaign against world No.262 Melinda Czink of Hungary on Monday. 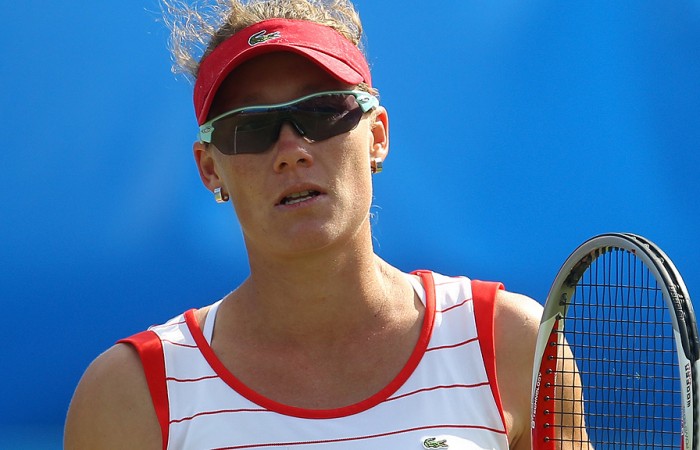 Samantha Stosur may have to do something she has never done before if she’s to make it to the second week at Wimbledon – beat her nemesis and former champion Maria Sharapova.

Australia’s leading tennis players have all been handed mountains to climb in their bid to make inroads at Wimbledon this year.

And Stosur has drawn a potential fourth round showdown against Sharapova at the south-west London venue.

The Russian has won all eight encounters against Stosur, including victory only last month in Rome on clay.

Stosur, who has never reached the fourth round at Wimbledon, has been in impressive form on grass this week in the lead-up tournament in Eastbourne.

She defeated last year’s Wimbledon finalist Vera Zvonareva on Thursday in a marathon match to suggest she may be finally ready to get her act together on grass.

Stosur will open her campaign in SW19 against world No.262 Melinda Czink of Hungary on Monday.

The good news for Lleyton Hewitt is that he has been handed an extra day to rest his foot injury before an opening round match against Japanese player Kei Nishikori on Tuesday.

They have never played but the youngster is expected to provide formidable opposition as the 2002 champion tries to defy a painful foot complaint.

Nishikori has never won a match at the All England Club but has all the tools to make life extremely difficult for the injury-troubled former world No.1.

If Hewitt were to progress, standing in the next round is expected to be Swedish fifth seed Robin Soderling and his sledgehammer forehand.

Jarmila Gajdosova, who reached the fourth round at Wimbledon last year, has a potential third round showdown with world No.1 Caroline Wozniacki.

Gajdosova has lost both matches against Wozniacki, their two meetings both coming on hard courts.

Gajdosova will meet former top 25 player Alona Bondarenko in the opening round, the world No.105 from the Ukraine on the way back from knee surgery.

The former Slovakian could possibly meet compatriot Anastasia Rodionova in the second round.

The 28-year-old Australian, who posted her best ever grand slam result at Wimbledon reaching the semifinals 2000, has beaten the world No.7 Italian all three times they’ve met, the latest defeat in Kuala Lumpur in February.