Samantha Stosur has made a promising start to her Wimbledon preparations by rolling Nadia Petrova 6-1 6-4 in the key lead-up event in Eastbourne. 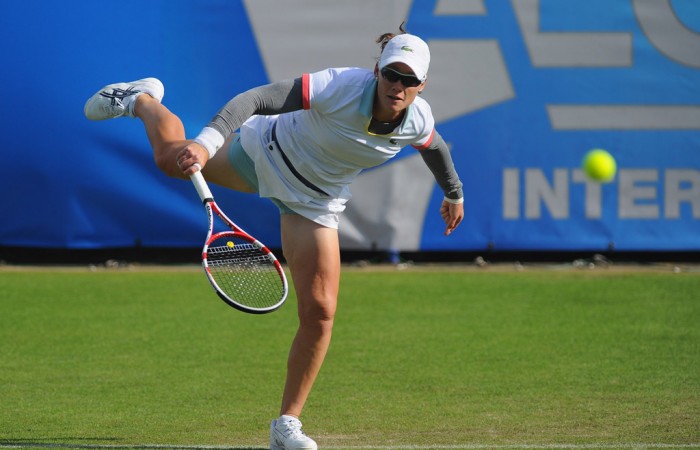 Samantha Stosur has made a promising start to her Wimbledon preparations by rolling Nadia Petrova 6-1 6-4 in the key lead-up event in Eastbourne.

The Russian had notched up comfortable victories in their previous four meetings before the Australian turned the tables with a 52-minute victory in tricky, windy conditions.

Stosur had won no more than six games in a match against world No.37 Petrova before producing the comprehensive win over the two-time Wimbledon quarter-finalist on grass.

The Australian has only reached the third round at Wimbledon once in eight trips and grass is regarded as her weakest surface.

She has made the semi-finals twice in the past at the Devonshire Park event and was keen to make another strong run this week.

“When I got 4-0 up in the first set I thought at least you have got more games in one set than you ever have before,” Stosur said.

“I have struggled against her in the past so to win and to win relatively comfortably was good.”

Compatriot Jarmila Gajdosova had her tournament brought to a halt on the English south coast with world No.13 Agnieszka Radwanska of Poland defeating her 7-6 (7-5) 7-5.

The world No.28 Australian had her chances, leading 4-2 in the first set and 5-2 in the second set, but was unable to put away the world No.13 who rode her luck at times.

Of all the grand slams, Radwanska has enjoyed her most consistent results at Wimbledon and Gajdosova felt she was still heading in the right direction.

“I am not that disappointed,” she said.

“I thought I played alright today, I served well and I don’t really know. There were a few points here and there.”

Stosur will next meet the winner of Anastasia Pavlyuchenkova and a qualifier for a possible third round showdown with the returning Serena Williams.

In the men’s draw Lleyton Hewitt is scheduled to play Olivier Rochus in a first round match here on Tuesday.