Samantha Stosur is trying to turn her French Open fade-out into a positive by using the extra time to sharpen up on grass before Wimbledon next week. 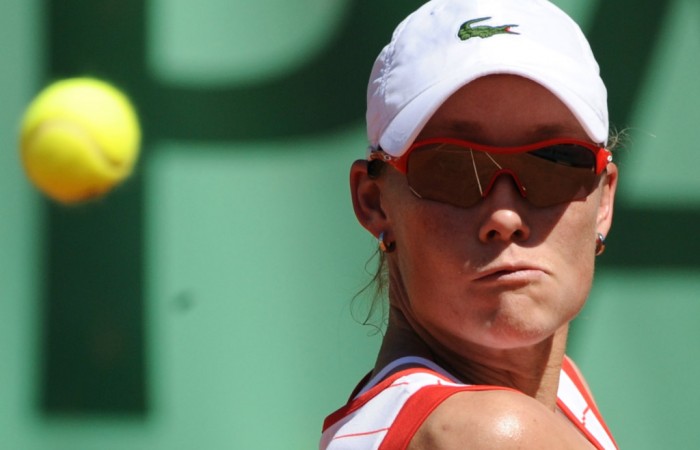 Samantha Stosur is trying to turn her French Open fade-out into a positive by using the extra time to sharpen up on grass before Wimbledon next week.

The Australian made a promising start to her grasscourt campaign by whipping two-time Wimbledon quarter-finalist Nadia Petrova 6-1 6-4 on Monday in their opening round clash in Eastbourne.

Last year’s Roland Garros finalist said her limp third round exit in Paris had acted as a major wake-up call for her.

She has used the extra week to fine-tune her skills on grass, which has proven her weakest surface, having only reached the third round once in eight trips to Wimbledon.

The fortnight turnaround between the end of the French Open and start of Wimbledon makes the transition from clay to grass the toughest on the tour for players.

“It was not the way I wanted, but I figured after a couple of days of that disappointment, I thought you can make that into a positive by practising on grass longer,” she said.

Stosur said her shock three-set loss to Gisela Dulko at Roland Garros had reminded her of the importance of being on top of her game for every round of a grand slam.

“I was struggling a little bit (earlier in the year) and then got over to Europe and started playing well again and really got my confidence back and really mentally I was able to turn things around.

“In that match, I felt I went backwards a few steps.”

“That match showed that you have always got to be diligent.”

Stosur believed she had come to terms with her loss in Paris.

“I did not really watch much of the tennis once I had lost,” she said with a smile.

“I think everyone pretty much turns the TV off after they lose.”

Stosur was no mug on grass, reaching the semi-finals twice in Eastbourne.

“I think if you are a good player, you should be able to be good on any surface,” she said.

“Even though I have not done so well at Wimbledon, I know the way I need to play. It is just a matter of playing it better.”

One player backing Stosur to bounce back was Italy’s Francesca Schiavone, her conqueror in last year’s French Open final.

“For Sam, it was bad (to lose so early at Roland Garros) but I think she has great qualities in any case to have good results in Wimbledon or US Open,” Schiavone told AAP.

“So don’t worry Australia. She is coming again.”

Meanwhile, Stosur’s Fed Cup teammate Jarmila Gajdosova was far from discouraged by her loss to world No.13 Agnieszka Radwanska on the English south coast.

The Polish player defeated her 7-6 (7-5) 7-5, but Gajdosova felt everything was coming together for her on grass.

“I thought I played well. I can’t really say that I am disappointed by the way I played,” she said.