Hewitt dumped out at Halle 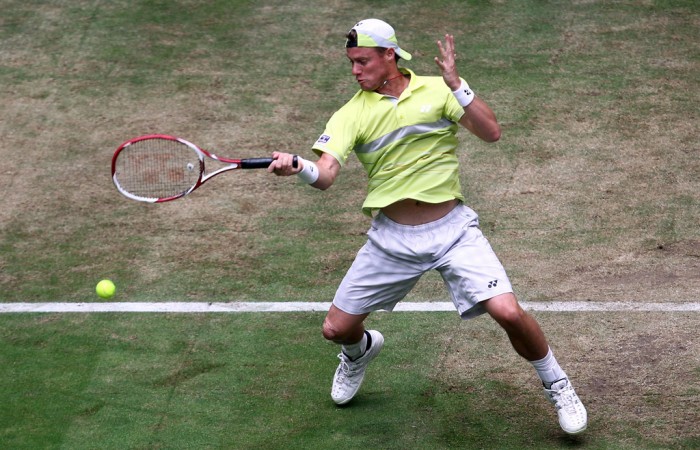 Defending champion Lleyton Hewitt was dumped out of Halle’s ATP grasscourt tournament after he went down in straight sets to Philipp Kohlschreiber in Friday’s quarter-final.

Kohlschreiber reached Halle’s semi-finals for the fourth time in his career after securing a 7-6 (7-4) 6-3 win over the former world No.1 in exactly 90 minutes.

The German smashed down 14 aces, compared to the Australian’s nine, in a hard-fought match and the defeat means Hewitt, who is making his comeback after ankle surgery, is set to drop out of the top 100 in the ATP rankings.

But two-time grand slam winner Hewitt will still be happy with his progress in Germany, giving him some much-needed court time with Wimbledon starting later in the month.

“Today, I could see an improvement in my game – everything was just fine and I often had a bit of luck on my side,” said Kohlschreiber.

“I couldn’t do much wrong. This match was good – although he is coming back from injury, Lleyton Hewitt is still one of the best players in the world.

“Now the bar has been set high. The next game will be hard, no matter who is on the other side of the net. Form on the day will decide the match.”

It was Kohlschreiber’s strong serve which carried him to victory and he will play Gael Monfils in Saturday’s semi-final after the Frenchman beat Germany’s Florian Mayer 6-4 6-4 in little over an hour.

After the withdrawal of world No.3 Roger Federer on Monday, Tomas Berdych became the top seed and the winner of the 2007 tournament had few problems as he enjoyed a 7-6 (7-3) 6-1 quarter-final win over fifth-seed Viktor Troicki.

The firm surface at Halle is favouring the strong hitters and this was a battle of the big guns as Berdych smashed down 13 aces, compared to the Serbian’s 11, as both players contributed to 14 aces in the first set alone.

Berdych will meet Philipp Petzschner in his semi-final after the German earlier booked his place by knocking out eighth-seeded Canadian newcomer Milos Raoni.

“It was a tight match on a knife edge. I nearly won it in the second set,” said Petzschner, who also reached the semi-finals here last year.