Hewitt through to Halle quarters

Defending champion Lleyton Hewitt had few problems on Thursday as he set up a quarterfinal clash against crowd-favourite Philipp Kohlschreiber at Halle's ATP grasscourt tournament. 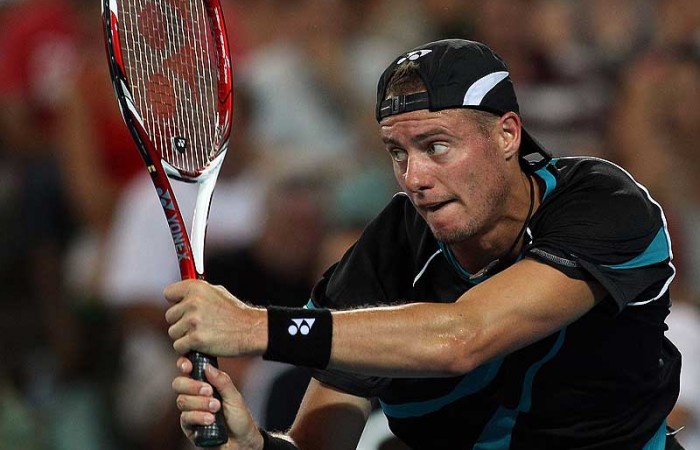 Defending champion Lleyton Hewitt had few problems on Thursday as he set up a quarterfinal clash against crowd-favourite Philipp Kohlschreiber at Halle’s ATP grasscourt tournament.

The Australian won his second-round match against Italy’s Andreas Seppi 6-4 6-4 in one hour and 20 minutes.

With Wimbledon starting in 10 days, the former world number one admitted he was glad to have put a hard-fought match under his belt.

“This match was good, though it was a tough battle for me,” said 30-year-old Hewitt.

“Seppi had already played well against quality players. I remember him playing very well against James Blake at Wimbledon, so I know he plays well on grass.

“I was able to keep the ball flat and I am a little surprised about my performance.

“I feel pretty comfortable playing out there. Every time I come back from injuries, I noticed my ball-striking always comes back quickly and easily.

“It is the adjustment and the feeling for the court that is the thing missing.”

“Obviously Kohlschreiber is a quality player, who has come far in this tournament so I have to watch out,” said Hewitt, who was also still involved in the doubles.

French third-seed Gael Monfils is also into the quarterfinals and faces another German opponent in sixth-seed Florian Mayer.

The 24-year-old Monfils saw off Croatia’s Ivan Dodig with a 6-2 6-3 win, but admitted he was not a natural on grass and was looking to improve his game with Wimbledon now ten days away.

“I really feel good, especially because I moved well,” said Monfils, who beat compatriot Florent Serra in straight sets in the first round.

“I am happy about that, because I do have problems adjusting to grass. In the last 10 days before Wimbledon, I want to improve my overall game further still – serve faster and stronger and work on my movement.

“Last year, I was terrible on grass, because that surface does not come natural to me, so this year I am happy. I want to continue improving.

“All in all, after this second easy win, I think I have made a good debut on grass here in Halle.”

He fired down 13 aces on the firm Halle turf, which was favouring the big hitters, but said Monfils would start as favourite in their quarterfinal.

“In my opinion, Monfils is slightly ahead as the favourite,” said Mayer.

“I’m surprised how well he is playing on court here, but I must play my own game and let form on the day decide.

“I will have to get things right under pressure and play my game, otherwise it will be really difficult.”