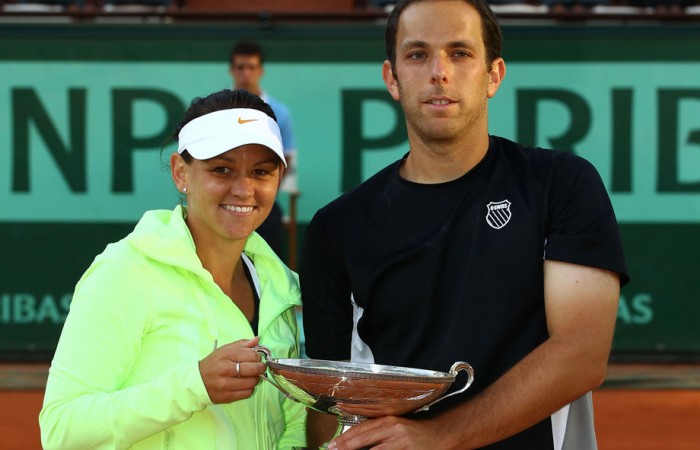 “I never thought I would win a Grand Slam title,” said 26-year-old Dellacqua. The West Australian made it to the final of the French Open doubles in 2008 with Francesca Schiavone, but fell at the final hurdle.

“It’s just been a really good couple of weeks I think for both of us. To finish it off with a Grand Slam title is – I mean, I’ve made a final before, but to win and get one under the belt, it’s pretty exciting.”

After their success on clay, the pair are now weighing up whether or not to try their luck on the grass together at Wimbledon.

“We haven’t discussed it, but I’m sure if Scott thinks I’m good enough, yeah, maybe we’ll be able to play,” said Dellacqua, to which Lipsky added: Yeah, I hope so. I can’t really argue with the week we had here. Hopefully we can keep doing it.”

The pair told reporters after the final that the key to their success was their aggressive play.

“I think with the format, you know, short deuces, and obviously a super tiebreak for third set, it really does change the dynamics of how you kind of play. You’ve got to be aggressive on the big points,” said Dellacqua.

“We stepped up when it mattered. We were always gonna walk off the court knowing we went for it. We went for it, and we’ve got a Grand Slam title.”

For Dellacqua, the solid hit-out she’s had in both doubles and mixed doubles in Paris has given her confidence a boost as she continues her long climb back to the top 100. Currently ranked No.317 in the world, she still has a way to go to get back to her career-high ranking of 39.

“The last two years have been not so good. I’ve had a fair bit of time out of the game. To be honest, three months ago I was playing Challengers, [for] $25,000 [prize money] in Australia, just playing doubles thinking I wasn’t even going to be playing at the French Open.

“So I’ve exceeded anything that I thought I would achieve right at this point. Yeah, it’s all steam ahead for me. Hopefully playing these big matches like this, playing big points helps my singles, because that is a big focus.”