Astrid Bowl reigning champion and French Open main draw junior Ash Barty opens up about life on the road as she chases her tennis dream. 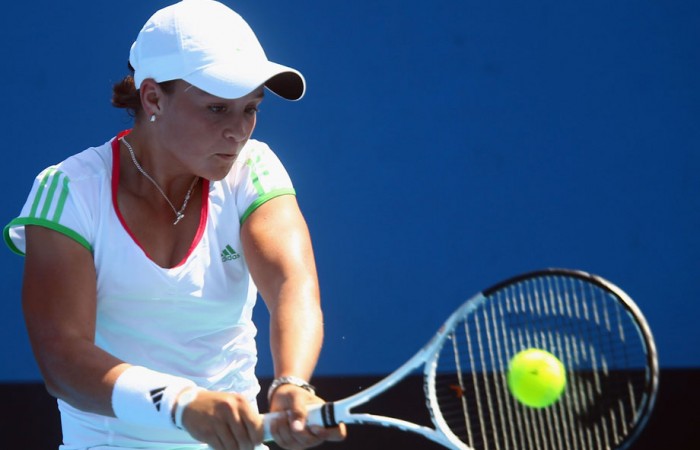 Having not travelled to Europe a lot in my tennis career, I forgot how long it takes to fly over here. Flying makes me feel a little uncomfortable which probably doesn’t suit a tennis player’s lifestyle, but I suppose I will get used to it. Well, I sure hope I do!

Starting our journey with a relatively short flight from Brisbane to Sydney was the easy part. Changing terminals can take time, but fortunately Nicole Pratt had a pretty easy transition to Sydney International Airport.

Our eight-hour leg from Sydney to Singapore was pretty easy as well. Being able to relax in the first class lounge before boarding our flight made it a little more enjoyable!

The tough one that I don’t even remember enjoying was Singapore to London. We only had the luxury of 45 minutes in Singapore while they were refuelling our A380, which went so quickly. Being stuck in a seat for eight hours seems to take a lifetime, but walking for 45 minutes around Singapore airport was over in a blink of an eye.

When boarding our flight from Singapore to London I actually realised how much longer we had to go. I had to sit down in the same seat, next to the same people, watching the same tiny TV screen for another 12 hours! I tried not to think about it, but when you are watching the minutes tick over, one by one, your mind starts to play tricks on you.

Finally arriving in London gave me a little feeling of accomplishment – but to burst my little bubble, we had yet another flight from London to Brussels! Luckily it was only an hour.

We arrived at our hotel the afternoon of Thursday 19 May and went to the practice courts straight away. Pratty and I were the first team on site and that in itself gave me a feeling that the long trip was worth it. After a light hit we went back to the hotel room and tried to stay awake, which was way more challenging than I expected!

A few rough nights of sleep didn’t effect my preparation for the 2011 Astrid Bowl. Main draw started on Monday and I got off to a good start. Defeating a Belgian wildcard in three sets gave me some good court time.

That was my only three-setter of the week and I think my body was pretty pleased with that. In my second round I beat the eighth seed, followed by the twelth seed in the round of 16. In my quarterfinal round I played a girl from Belarus and played a good match to get the win. In my semi, I played a great match and beat a Russian girl 6-1 6-0. Each match I was feeling better and better, and getting a little bit more court time with doubles was very beneficial.

In the final I had to play Victoria Duval, the girl I am playing doubles with next week in Paris. The crowd was awesome! There were a few Belgians cheering like crazy, which made the atmosphere even more enjoyable.

We were both nervous starting the match, but I was able to get first bite at the cherry and take the first set 6-2. Breaking early in the second I raced to a 5-1 lead. I was serving for it and I couldn’t buy a first serve! After three match points on my service game, I was unable to hold. Victoria went to serve and I broke her to win the match, 6-2 6-2.

A great start to my European tour winning both singles and doubles here at the 2011 Astrid Bowl! Pratty and I now have to drive to Paris in preparation for the Junior French Open that begins tomorrow. I’m really looking forward to my French Open debut and hopefully I can keep this level of tennis up over the next few weeks!

Ash has been drawn to play the 12th seed, Ganna Poznikhirenko of Ukraine in the first round of the French Open junior championships.