Jarmila Gajdosova is the sole Australian left in the singles at this year's French Open following the departures of Samantha Stosur and Anastasia Rodionova on Friday. 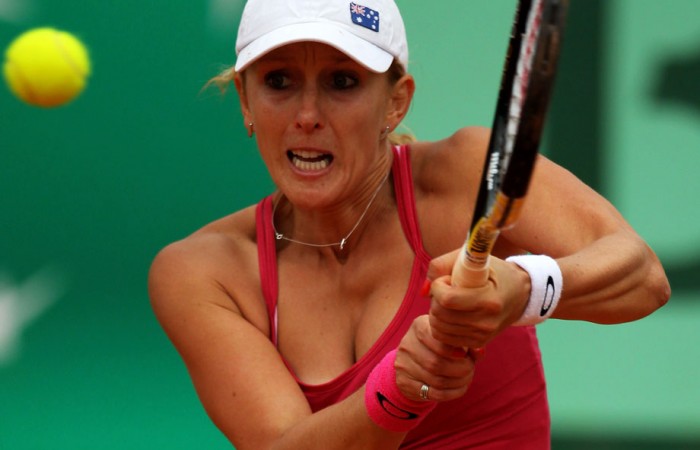 Jarmila Gajdosova is the sole Australian left in the singles at this year’s French Open following the departures of Samantha Stosur and Anastasia Rodionova on Friday.

Gajdosova is due to play her third-round match in Paris against world No.12 German Andrea Petkovic on Saturday night (AEST).

Stosur was left stunned by her early exit from the tournament on the same day as world No.1 Caroline Wozniacki was knocked out by Daniela Hantuchova.

“Obviously the conditions were pretty tough and it wasn’t good for either of us,” Stosur said.

“She seemed to be out ahead a little bit better and really kind of be the one dictating the points, which, for me, I’m usually the one able to do that.

“Pretty much right from the first game she kind of set that tone, and it was very difficult for me to turn that around.”

Meanwhile, Rodionova was encouraged by her performance despite being bounced out 6-2 6-3 by Zvonareva.

“I am disappointed I lost the match but I felt it was a good tournament for me,” she said.

“I had two good wins, I think that I am starting to play good tennis and overall I am really happy with the way that I move on the court.

“I was struggling mainly at the beginning of the year with my hip injury. Finally I feel that I can move on the court and it is a nice feeling to have two legs.”