Samantha Stosur's quest for a maiden Grand Slam title has come to an abrupt end in the French Open third round, being dumped out of the tournament by Argentine Gisela Dulko 6-4 1-6 6-3. 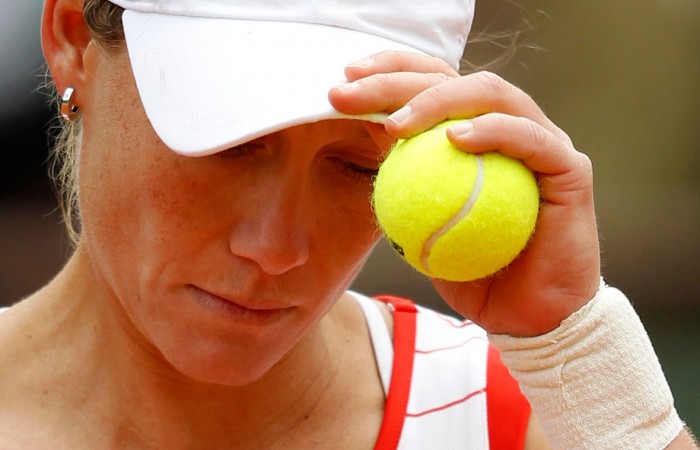 Samantha Stosur’s quest for a maiden Grand Slam title has come to an abrupt end in the French Open third round, being dumped out of the tournament by Argentine Gisela Dulko 6-4 1-6 6-3.

With the thermometer hovering around 16 degrees in Paris, Stosur was unable to impose her power game on the slight Dulko and made her earliest exit from the tournament in three years.

Stosur was the hottest of favourites for Friday’s match against the world No.51, having won both their matches on clay including in Madrid last month.

The Australian had only dropped seven games in her opening two matches against the Czech Republic’s Iveta Benesova and Romanian Simona Halep at Roland Garros.

She had looked to have well and truly shaken off a stomach bug this week before Friday’s lethargic performance.

Unlike her last start, she made a tentative opening in front of a sparsely-populated crowd.

Dulko comfortably dealt with the Australian’s normally potent serve, the cooler conditions stopping the ball from kicking off the surface as much.

Stosur only won 29 per cent of points on her second serve in the first set.

The South American quickly seized the initiative by rifling a series of backhand winners to seize a 4-0 lead.

The Queenslander broke Dulko but the South American kept pressing against a passive Stosur.

The Australian saved three set points before another wayward shot from her racquet sailed wide to decide the first set in 48 minutes.

Even though she regrouped to take the second set against a seemingly faltering Dulko, the normally poker-faced Australian showed her frustration at her errant display during the set by slapping her thigh.

Stosur looked to be pulling away with an early break but Dulko replied and captured the next five games to race to a 5-2 lead.

The Australian held serve but the South American was not to be denied, stepping up to serve out the match.

Stosur produced 35 unforced errors to Dulko’s 27 for the match.

It was the second big name scalp the Buenos Aires resident has claimed at a Grand Slam, rolling 2004 champion Maria Sharapova in the second round of Wimbledon in 2009.

With no overwhelming favourite on the women’s side this year, it was another missed opportunity for Stosur following last year’s gut-wrenching loss in the final to Italy’s Francesca Schiavone.

Rodionova is due to play third seed Vera Zvonareva later on Friday while Gajdosova meets world No.12 Andrea Petkovic on Saturday.