Samantha Stosur and Anastasia Rodionova have kept up Australia's presence at the French Open with straight sets victories in the second round at Roland Garros. 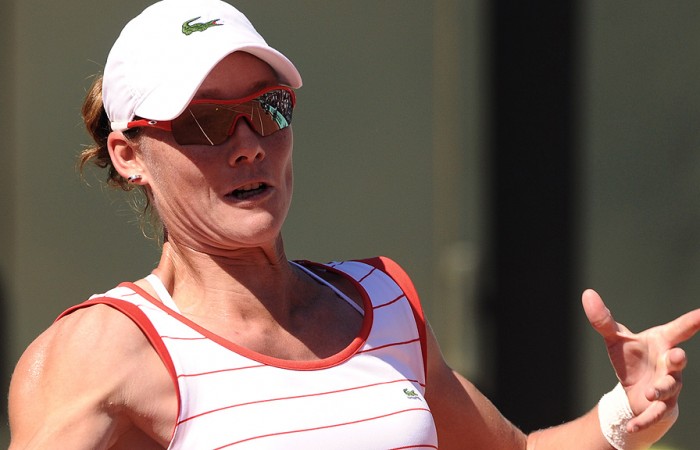 Samantha Stosur and Anastasia Rodionova have kept up Australia’s presence at the French Open with straight sets victories in the second round at Roland Garros on Wednesday.

The Queenslander erased world No.69 Simona Halep 6-0 6-2 in just over an hour while Rodionova took a tad longer in accounting for world No.131 Edina Gallovits-Hall, 6-1 6-4.

Rodionova has booked a date against third seed Vera Zvonareva after the Russian’s epic 4-6 7-5 7-5 win over Sabine Lisicki, the exhausted German qualifier needing to be stretchered off the court after the match.

Rodionova defeated Zvonareva, a Wimbledon and US Open finalist in 2010, in the second round at Roland Garros last year.

Jarmila Gajdosova, the only other Australian still alive, is due to play her second round match against Spaniard Anabel Medina Garrigues late on Thursday (Friday AM AEST).

Stosur was back to her imposing best on Wednesday, using her powerful serve and ground strokes to dump Halep for the second straight year.

“I think if you can get off to those good starts, especially when they have some opportunities, it can be a bit deflating [for the opponent],” she said.

“So I thought from that point on I kept the foot down, and played a really good match.”

The world No.6 believes it is an open field on the women’s side in 2011 as she looks to go one better than last year’s final loss to Italy’s Francesca Schiavone.

“I think anyone can beat anyone – from the top 10 especially,” she said.

World No.74 Rodionova, who was defeated by Gajdosova in the third round at Roland Garros last year, has never progressed to the fourth round of a grand slam.

“I’m happy that I’m in the third round, and looking forward to being there and competing as hard as I can,” Rodionova said.