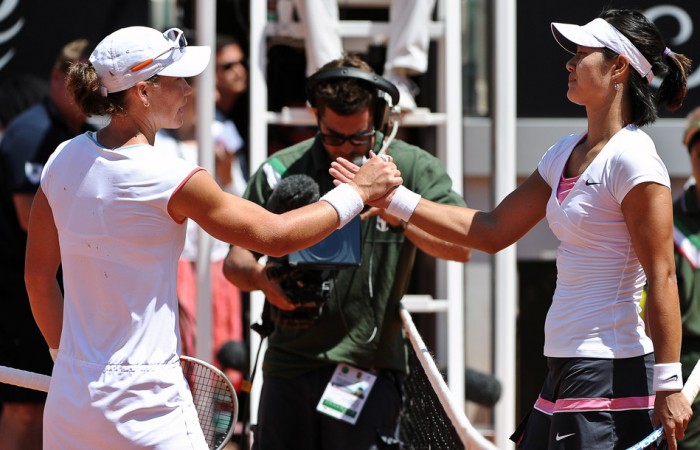 Which is why Australia’s 2010 French Open runner-up has returned to Roland Garros with hope and belief, but also harbouring realistic expectations.

“You start from scratch. You’re not starting in the final this year all because you made the final last year,” said Stosur ahead of the claycourt grand slam starting on Sunday.

“It’s one match at a time and the same old routines trying to get through each match.

“If I do find myself in that position again, then hopefully I can draw on that experience from last year.

“I’d like to think if it happened a second time around that I’d know what to expect a little bit more and maybe go out there and see what can happen.”

This is signature Stosur – level-headed, business-like and totally unaffected by success.

Friendly and approachable off court and fuss-free on it, Stosur prefers not to get too caught up in hype.

The 27-year-old will carry that same relaxed attitude onto Court Philippe Chatrier when she opens her quest to become the first Australian woman to win a grand slam singles trophy since Evonne Goolagong Cawley in 1980.

“I know my optimal zone, however amped you want to be, and it’s certainly not to Lleyton’s scale,” Stosur said.

“But I guess everybody has got to find what works for them.

“The key is to get to that state, whether it’s high or low, it’s what works for you.”

While the trademark sunglasses have been a fixture since she was 14, Stosur admits her poker face is a deliberate ploy to cash in on the relatively newfound aura that accompanies her place in the world’s top 10.

“You want to try and show that you’re feeling good in yourself, or confident,” Stosur said.

“I know (from earlier in my career) when I walked on the court against the best players in the world that it can be a very daunting prospect and I know how much that hurt me when I was trying to play them.

“So you try and bring a little bit more of a strong demeanour.

“I know when I play players and they get really hacked off and go a little bit silly on the court with their emotions, you can try and feed of that.

“It’s easier said than done never to lose the plot, but I know how much it helps me when I see my opponent do that, so you try and not give away too much.”

Stosur has been accused of being “too internal” at times and the world No.8 has worked hard to strike a balance.

“I think sometimes I do get a bit like that,” she said.

“That’s why it’s important to find that optimal place and I think certain occasions can affect you getting to that state as well.

“It’s a matter of working out if you need to let go of something, to not hold back.

“It’s harder maybe because of my shyness when I was growing up, coming out of my shell.

“I’m not one to be the flamboyant and `look at me’ kind of person.”

The sunnies are a vital part of her act too – but for a very different reason.

“It is amazing how much, because of all the years of wearing them, how sensitive my eyes have got out in the sun,” the Queenslander said.

“Now I couldn’t think of anything worse than being out there trying to serve into the sun or with the glare.”

The glasses, though, can’t shield Stosur from the spotlight that comes with trying to replicate her career run to last year’s final in Paris.

“That’s what comes with being a good player and ranked higher,” Stosur said.

“It’s just all part of the deal and the more it happens, the more you get used to it and the better you handle it.

“If I’ve got all that on me, then it probably means I’m doing something right and that’s a good thing.

“It’s been just over 12 months now since I got to the top 10 and I’ve managed to stay there.

“It’s coming up to a year ago since I made my first grand slam final, so there’s no doubt that I’d like to try and get back into that same position this year and try and win it.”

Such fighting talk is a victory in itself for Stosur, who failed to reach a semi-final in her first seven tournaments this year and openly admitted to struggling mentally to close out tight contests.

Under extreme pressure to defend a mountain of rankings points accrued during her tour-best 21-3 claycourt run in 2010, Stosur turned her season around with a morale-boosting third-set tiebreak triumph over world No.3 Vera Zvonareva in Stuttgart a fortnight ago.

“You can’t panic,” she said. “I wasn’t doing that much wrong. It’s a fine line between doing what you expect and not getting the results you want.”

Stosur backed up her semi-final showing in Stuttgart with a final appearance last week in Rome and will enter the season’s second major among the title favourites once again.

The eighth seed has recovered from the ill-timed bout of gastro that hampered her against Maria Sharapova in the Italian Open decider and is quietly confident of going one step further than last year’s final loss to Francesca Schiavone.

Sponsored by French companies Lacoste and Babolat, the popular Australian will also have plenty of support from the sometimes partisan Paris crowd.

“For whatever reason, the French crowds have always enjoyed watching me play and I’ve always been quite comfortable playing on that big court,” Stosur said.

“I’m obviously going to have lots of good memories and feel good on the courts so I’ll try and bring back some of that feeling that I had last year and the year before.

“I really enjoy playing there and I’m definitely going to give it my best shot again.

“But you’ve got to really stay focused on the week you’re currently in rather than looking in the past and thinking what if this doesn’t happen.”

Stosur won just four matches in her first four visits to Roland Garros before unlocking the key to claycourt success during a charge to the semi-finals in 2009.

“Overall, my game on clay has just gotten better and better as the years have gone on,” she said.

“In the last three years, I’ve probably felt more comfortable and it hasn’t taken me as long into the claycourt season to feel comfortable and to get used to the movement and the way I should be playing.

“I’ve really learnt to play on the courts the right way and appreciate how tough sometimes you have to be.

“I think my game naturally stacks up well on this surface. It’s just different and I just enjoy that challenge.”